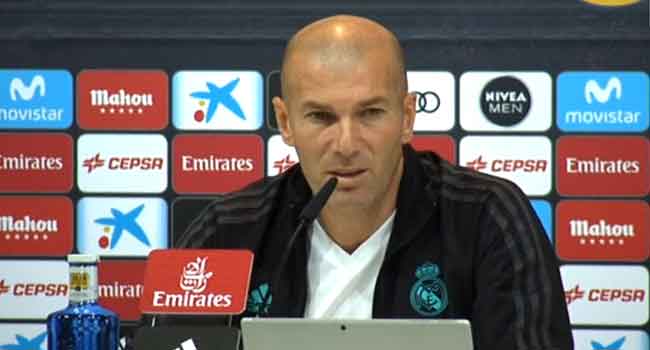 Zinedine Zidane insists James Rodriguez has nothing to prove to him when the Colombian faces Real Madrid with Bayern Munich in their Champions League semi-final, first leg, on Wednesday.

James has shone at Bayern since Zidane let him leave Real on a two-year loan deal last July at the end of three often difficult seasons in Madrid.

The Colombian attacking midfielder has rediscovered his best form while playing regularly again and has the chance in Munich to show Real and Zidane what they are missing.

“James loves to play football, so of course he’ll want to play well, but not to show me or prove me wrong,” said Real coach Zidane.

“I didn’t want James to leave. He wanted more game time, which I can understand.

“I never had any problem with him, he just wanted to play.”

Madrid paid Monaco 75 million euros ($91.7m) for James after he finished top scorer at the 2014 World Cup in Brazil and he made an impressive start in his first season.

However, Zidane’s appointment as Madrid coach in January 2016 set him back as the Frenchman gave him limited opportunities and often left him on the bench.

“The only reason he went was that he wanted to play more football,” said Zidane.

“I never had a problem with James, that was just something you journalists said.

“It’s the same problem every year, there are good players who have to sit on the bench and that’s sad.”

Real trail Barcelona by 15 points in La Liga and so the Champions League, which they have won in the last two seasons, is the last silverware available to them.

Zidane said Real are relishing the challenge against Bayern as they return to the Allianz Arena, scene of a 2-1 win in the first leg of the quarter-finals last season.

They also handed Bayern a record 4-0 home defeat in the 2014 semi-finals.

“We can’t shit our pants before a game like this, you have to enjoy it,” said Zidane with a grin.

“The players like matches like this, even if we know we will have to suffer to get a win here.

“This is a team which has been fighting at this level for a long time, it’s in the DNA of this club.

The Germans finished both legs with 10 men.

Javi Martinez was sent off in Real’s 2-1 win in Munich and Arturo Vidal also had two bookings when Bayern lost 4-2 after extra time in Madrid.

However, Real’s Germany midfielder Toni Kroos, who won the 2013 Champions League title with Bayern, says the Bavarians are better than they were 12 months ago.

Under head coach Jupp Heynckes, who also steered them to the 2013 treble, Bayern wrapped up the Bundesliga title three weeks ago and are into the German Cup final.

“They won the (Bundesliga) title very early, but haven’t let up,” said Kroos.

“They are very hungry. Their shape is better than last year, they are in top form and playing more like a team under Heynckes, but we are here to change that.

“This is our last chance to win a title. We are highly motivated, as we have been the whole season long in the Champions League.

“We haven’t taken the easiest route this year with PSG (Paris Saint-Germain), Juventus and now Bayern, but we are on the verge of the final.”

Neuer Ruled Out Of The Season After Accident