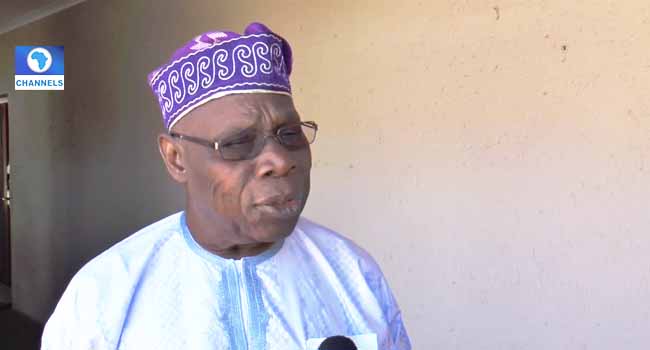 Former President Olusegun Obasanjo says nobody can intimidate him on the mission to set up a third force with the Coalition for Nigeria Movement (CNM), a group which he has been promoting across the country.

Obasanjo said this on Saturday when he addressed thousands of CNM members during a town hall meeting held at the Trans Amusement Park, Bodija, Ibadan.

“For me, I don’t think there is anyone that can intimidate me. Let me remind you, I have gone through many things. I have been jailed without committing any offence,” he said.

According to the elder statesman, CNM will soon become a political party. He then urged members of the group not to give in to any form of intimidation from the powers that be either individually or collectively.

He emphasised that he will cease to become a member of the group, once it becomes a political party, adding that this however will not reduce his concerns for Nigeria and unity of the nation.

“Men of valour don’t run away from challenges and it is the same thing with women of honour. Permanent voter’s cards (PVCs) are your instruments. If you have not collected yours, go and collect it. If you are not yet registered, go and register. They are the keys to open the doors,” he said.

Obasanjo also urged youths to participate in politics, noting that, this is one of the philosophies of CNM.

“The youths under 40 years old form more than 65 per cent of our population. Now, who will tell you that because you are under 40, you cannot play a very significant role in the affairs of your country?

“I was Head of State when I was under 40. Now, France has elected a president that is under 40 yrs. Botswana has just a vice president at 32 years old. Now, what we are saying is that the youths must be given a pride of place.”

The National Coordinator of the movement, Olagunsoye Oyinlola also at the event said verifiable members of CNM have scaled over three million, adding that the movement would participate in all the elections scheduled to hold this year in the country.

The meeting was also attended by a former deputy governor of Oyo State, Taofeek Arapaja; former secretary to Oyo State Government, Olayiwola Olakojo, who is the Oyo State Coordinator of CNM;  another ex-SSG in the state, Ayodele Adigun, Oyewole Fasawe, as well as a legal luminary, Hammed Raji, among others.