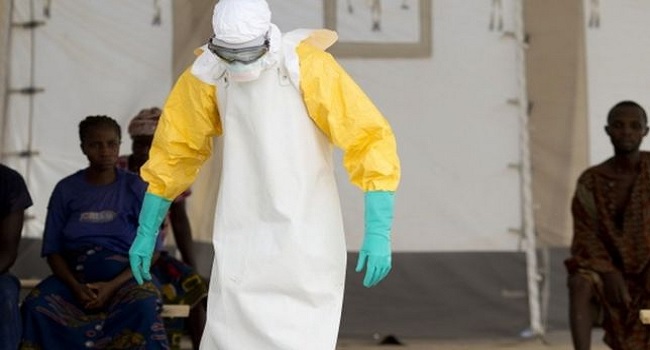 A fact file on the deadly Ebola virus, a new outbreak of which has killed 17 people in the northwest Democratic Republic of Congo, according to the DRC government and World Health Organization (WHO).

The average fatality rate is around 50 percent, varying from 25 percent to 90 percent, according to the WHO.

Ebola was first identified in 1976 by a team led by a young Belgian microbiologist, Peter Piot, who later founded UNAIDS, the United Nations’ spearhead agency against HIV/AIDS.

They named the virus after a river in the Democratic Republic of Congo — then known as Zaire — that was close to the location of the first known outbreak.

Four of the virus species are known to cause disease in humans — Zaire, Sudan, Bundibugyo and Tai Forest.

How it is transmitted:

The virus’ natural reservoir animal is probably the bat, which does not itself fall ill, but can pass the microbe on to humans who hunt it for food.

Chimpanzees, gorillas, monkeys, forest antelope and porcupines can also become infected with Ebola, which makes them potential vectors for transmission if they are killed, butchered and eaten.

Among humans, the commonest form of infection is through close contact with the blood, body fluids, secretions or organs of someone who is sick with Ebola or has recently died — a risk in African cultures where relatives typically touch the body of the deceased at funerals.

The WHO says it is unclear whether the virus may be transmitted through sexual intercourse, but urges safe-sex practices among all Ebola survivors and their sexual partners.

Those infected do not become contagious until symptoms appear — something that happens after an incubation period of between two and 21 days.

After-effects have often been observed in survivors, including arthritis, problems with vision, eye inflammation and hearing difficulties.

There is no current vaccine to prevent Ebola or licensed treatment for it, although a range of experimental drugs is in development. Early care with rehydration may boost the chance of survival.

Given the lack of a pharmaceutical weapon against Ebola, health experts have responded with time-honored measures of control, prevention, and containment.

They use rigorous protocols to protect medical personnel with disposable full-body suits, masks, goggles and gloves and disinfecting sprays.

Controlling the spread in the community is combatted by tracing and isolating people who have been in contact with an Ebola victim. Enlisting the support of the community through awareness campaigns is vital.

That outbreak killed more than 11,300 people out of nearly 29,000 registered cases, according to World Health Organisation estimates.

The real figure may have been significantly higher, however.

More than 99 percent of victims were in Liberia, Guine, and Sierra Leone although cases popped up all over the world, sparking panic.

The WHO declared the epidemic over in January 2016, although this was followed by flare-ups in all three countries.

Before the West African outbreak, Ebola killed about 1,700 people over four decades.

SOURCES: WHO, US Centers for Disease Control and Prevention (CDC).

AFCON Match Preview: Nigeria Battle Tunisia In A Clash Of The Eagles