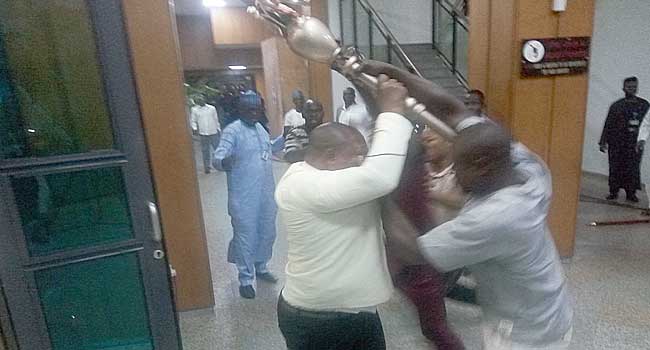 The Divisional Police Officer in the National Assembly, CSP Sulu-Gambari Abdul, has blamed the April 18th invasion of the Senate and theft of the mace by hoodlums on internal conspiracy.

Abdul said this on Wednesday during an investigative hearing into the incident by a joint ad hoc committee of the Senate and House of Representatives.

“On April 18, at about 11 a.m., my attention was drawn to a group protesting at the gate, and while I moved to address the group, I was informed that some people were running away with the mace.

“I signalled all the entry points that nobody drives in or out but three men approached me identifying themselves as security operatives and requested to be allowed to go.

“The strain of blood on their clothes made me suspicious and I ordered their arrest. In all, six people were arrested same day and handed over to the Force Headquarters alongside charms recovered from them.

“In addition, an unmarked Prado jeep and a Toyota Hilux were impounded and they are with the police,” he said.

The Chairman of the committee, Senator Bala Ibn N’allah in response said the Police should provide the committee with copies of the station diary where entry of the crime was made.

He also directed that the committee should be given copies of the crime routine diary, pictures of those arrested and the transfer register explaining where the invaders were transferred to.

Senate Plenary was on Wednesday, April 18 disrupted by some hoodlums who stormed the Upper House and snatched the mace from the chamber.

The Red Chamber consequently issued a statement in which it condemned the incident as an act of treason and an attempt to overthrow a branch of the Federal Government of Nigeria by force.

It also accused the lawmaker representing Delta Central senatorial district, Senator Ovie Omo-Agege, claiming he led the hoodlums to plenary to seize the symbol of authority of the Senate.

Senator Omo-Agege was later picked up by the police on the premises of the complex, although he has since denied any involvement in the theft of the mace and freed from police custody.

The police later recovered the mace under the flyover and returned it Senate, about 24 hours after some hoodlums invaded the Red Chamber.

#EndSARS: UK Parliament Does Not Speak For British Govt – FG

#EndSARS: Senate Urges FG To Give 1% VAT To States Affected By Violence