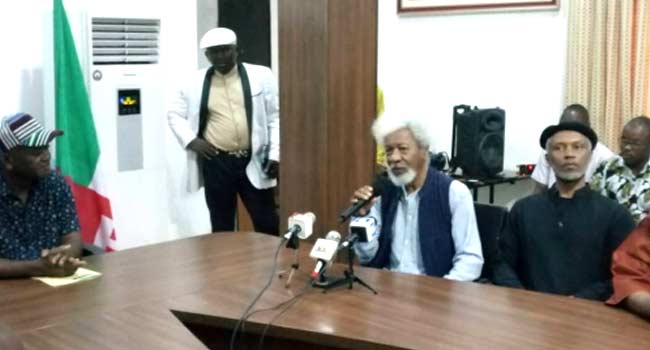 Nobel Laureate Professor Wole Soyinka has called on the International Community to intervene in the series of herdsmen killings across the country to avoid a repeat of the Rwanda genocide in Nigeria.

This is not the first time Professor Soyinka is making this call. He had earlier warned that the country risked genocide if the Federal Government fails to put an end to these killings.

He also asked the Federal Government to take a decisive action to end what he described as the ongoing ethnic cleansing in some parts of the country.

The Nobel Laureate spoke about the killing on Thursday morning when he led a delegation of Association of Nigerian Authors to a meeting with the Benue State Governor, Samuel Ortom, at the Government House in Makurdi, the state capital.

At the meeting which comes few days after two Catholic Priests and 17 parishioners killed by suspected herdsmen, were buried, Governor Ortom informed the literary icon that three persons were again killed along Naka road while returning from the burial of the priests.

On hearing this, Professor Soyinka faulted the Federal Government’s response to the killings by suspected herdsmen, which he described as an ethnic cleansing agenda.

He accused the Federal Government of treating the killings like a ‘malignant tumour with vaseline’.

At the end of the meeting, both leaders called for a quick military response, backed by the international community which can effectively end the herdsmen menace across the country.

The visit of the Nobel Laureate and ANA to the state is to commiserate with the state governor and people of the state over the killings there.

‘Nothing To Forgive:’ Soyinka Speaks About Relationship With Gowon