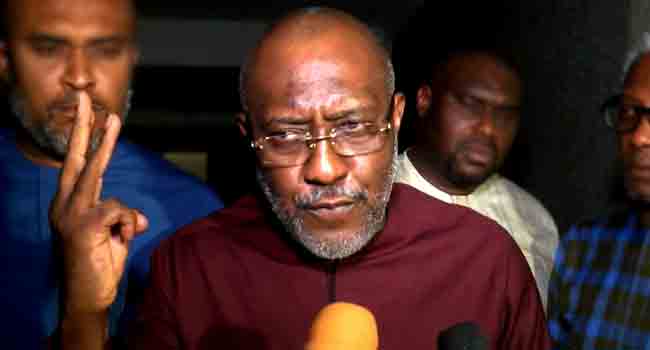 The trial of the former National Publicity Secretary of the Peoples Democratic Party (PDP), Olisa Metuh, for alleged N400 million fraud continued on Friday with the defendant still absent in court.

It is the second time Mr Metuh will be absent in court due to ill health and the trial judge, Justice Okon Abang, has insisted that the case will continue despite his absence.

As the trial commenced, the prosecutor stated in his submission that more than 40 minutes after, no single lawyer had appeared on behalf of the defendant neither was there any letter to explain their whereabouts.

He also noted that the absence of Metuh’s counsel is willful because even if there was a letter, it ought to have come three days before today’s trial commenced, and as such the proceedings should continue as scheduled.

But in his submission, Mr Owugbufor (counsel to the second defendant) which is Mr Metuh’s company, said he is aware of section 349 subsection 2, which according to him, states that where a defence lawyer is absent from court after two adjournments, the court shall ask the defendant if  he wishes to keep engaging such a lawyer.

He further stated that if he then wishes to get a new counsel, the court ought to give him (the defendant) a period of 30 days to engage another counsel of his choice.

He also referred the court to subsection 4 which states that where a defendant is unable to get a lawyer the court shall make provision of a lawyer by way of legal aid for the defendant.

Owugbufor, therefore, argued that the application of the prosecutor is premature and should be dismissed or if the court wishes, it can be struck out until when the court considers the law.

The judge, however, maintained that the trial would go on despite Metuh’s absence.

Earlier the court summoned the General Manager of Channels Television Abuja office and a presenter of the station’s flagship programme Sunrise Daily, Maupe Ogun-Yusuf, to appear in court over allegations of prejudicial statements made on the programme.

The prosecution counsel had frowned at the appearance of a lawyer involved in the matter on Sunrise Daily and therefore asked that the representatives of Channels Television appear in court.

While addressing the court, Counsel to Channels TV said the order was forwarded to the chairman of the board because there is no officer known as the General Manager of Channels Television.

According to him, the chairman directed the Senior Manager News and Corporate Services of Channels Television, Oluyemisi Ipaye and also Mrs Maupe Ogun-yusuf to appear before the court today (Friday).

In his ruling, Justice Abang commended the station for complying with the order, even before it was made, saying it would help the court resolve the issues speedily.

He, however, ordered that the station appears again on July 3, at 9.00am with its equipment to play the said clips.

This, according to him will enable the court decide whether the alleged prejudicial statements related to the case were aired on the program.

Metuh who has been on trial since 2015 over funds he allegedly collected from the former national security adviser, Sambo Dasuki, collapsed in court on Monday (May 21) and has not been seen since then.