Falz Fires Up The Internet With ‘This Is Nigeria’ 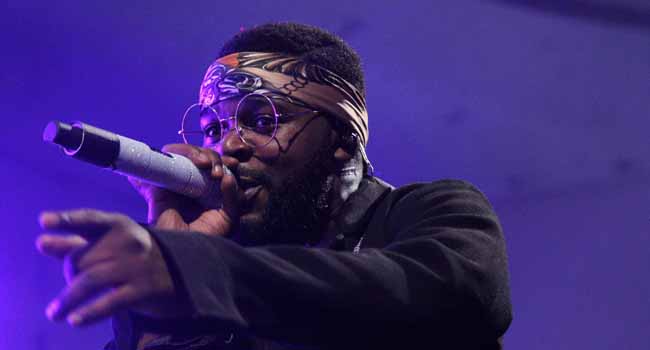 With nearly three million YouTube views in less than a week and an avalanche of reactions on social media, rapper Falz’s “This is Nigeria” has touched a nerve about the country’s problems.

The track and video, a cover version of US performer Childish Gambino’s “This is America”, sees Falz wander around a huge warehouse bare-chested as a series of violent scenes unfurl.

“This is Nigeria. Look how we living, nah! Look what we eating, nah!” he riffs to the camera.

Machetes replace the guns of the US version, where Gambino questions his compatriots about life for black people and police brutality.

That version has been viewed more than 220 million times on YouTube in the last month.

“This is Nigeria” was released on the video-sharing platform on May 25 and paints an unforgiving picture of life in Africa’s most populous nation.

Despite having generated billions of dollars from oil, more than 70 percent of Nigeria‘s 180 million people live in poverty, corruption is endemic and violent unrest commonplace.

If the track arouses passions, it’s because it overturns the status quo.

In Nigeria, it’s rare to see a music video open with anything other than scantily clad women sprawled over a luxury car or free-flowing champagne.

“I think we are too distracted by entertainment in general, by flashy lifestyle,” the 27-year-old Falz told the private Wazobia television channel this week.

“We need to pause and think and look at our social space. We have a voice as artists and we need to use that voice for the right purpose, we need to speak the true to wake people up.

“The terrible state of Nigeria has become so normalised.”

Falz has won high praise in Nigeria and abroad for the track.

In the United States, hip-hop star P. Diddy shared the video on his Instagram account, celebrating “artists changing the game!!!”

Music journalist Joey Akan was quick to compare Falz to Fela Kuti, the icon of Afrobeat and freedom of expression during Nigeria‘s three decades of military rule.

“‘This is Nigeria‘ embodies the revolutionary and rebel spirit of Fela Anikulapo Kuti before him,” he wrote in an opinion piece published online by CNN.

“It shows that contrary to popular opinion among local talents, there is a demand for conscious music.

“Musicians tend to avoid political commentary, partly due to an ingrained fear of persecution from the powerful political class.”

For example, Nigeria‘s 2Baba last year announced a mass demonstration against economic recession but was forced to back-pedal under pressure.

Global superstars such as Davido or Wizkid meanwhile continue to perform for political bigwigs and captains of industry who are prepared to pay a small fortune for private concerts.

Falz — his real name is Folarin Falana — is not a nobody.

He gave up a career in law to go into music. His father is leading Nigerian human rights lawyer Femi Falana and excerpts of his speech on corruption are in the track.

One of Falana senior’s most famous clients was Fela Kuti.

Falz is giving a voice to the thoughts of many Nigerians who are tired of years of bad governance, and as President Muhammadu Buhari vies for a second term at elections next year.

After three years in power and repeated promises to turn the country around, they feel nothing has been done — and may even have gotten worse.

In Falz’s video, dancers wear long blue hijabs in a clear reference to the schoolgirls from Chibok, whose kidnapping by Boko Haram caused more outrage abroad than at home.

In other scenes corrupt police officers beat up young men and drug addicts, and generators run flat out to make up for a lack of electricity from the national grid.

Not everyone is a fan of “This is Nigeria“. Some have criticised it for “plagiarism” and of even being a “bad Nollywood” version of the US track.

“If we go by social media reaction… we could give him (Falz) the award for Best Political Commentary,” critic Oris Aigbokhaevbolo wrote on medium.com.

“He would deserve the award but that is only because there is no competition.

“Wizkid and Davido will not sing it, sequestered as they are in some club or festooned to a fluffy bed by a buxom broad.”