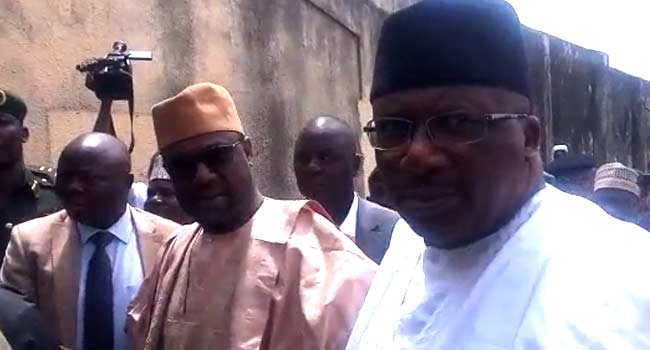 The Minister of Interior, Abdulrahman Danbazau, has visited the Medium Security Prisons in Minna, the Niger State capital, where there was a jailbreak.

The visit of the Minister follows after gunmen attacked the prison on Sunday night in the Tunga area of Minna Metropolis.

Two persons, a prison warder and a commercial motorcyclist, were killed in the process of the jailbreak.

confirming the incident to Channels Television, spokesperson of the prison service in Niger State, Rabiu Shuaibu, “The unfortunate incident was perpetrated by armed criminals who attacked the prison and gained access after an exchange of fire with prison armed men.

“The number of prisoners on the flee is still being compiled but some of the fleeing prisoners have been rearrested.

“The Prison authority in Minna is profiling the number of fleeing inmates to ascertain the escaped prisoners. So far, through the combined effort of all security agencies in the state, seven prisoners who attempted to escape have been recaptured and returned to the prison.”

The prison service has since called on residents of the area to go about their normal activities noting that normalcy has returned and security agencies are working to ensure that fleeing inmates are recaptured.