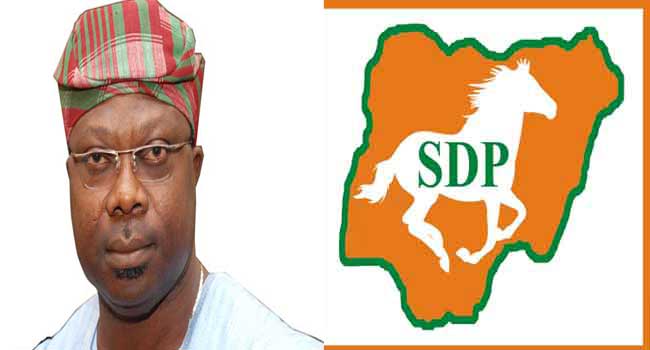 The Social Democratic Party (SDP) in Osun has alleged that Senator Iyiola Omisore is planning to hijack the party, faulting Omisore’s membership of the party.

Chairman of SDP in Osun State, Ademola Ishola on Monday reiterated the stance of the party on the membership status of Omisore, insisting that he has not completed the process of registration as a member from the party.

Ishola told journalists in Osogbo, the Osun State capital, that the party has not received Omisore who decamped from the Peoples Democratic Party (PDP) into SDP in the state.

He alleged that Omisore’s plan was to hijack the party and insisted that this move will be resisted.

Ishola explained that the process of becoming a member of the party, in line with the dictates of the party constitution requires familiarisation and registration from the ward to the local government levels.

Omisore according to Ishola is jumping the gun by relating with officials at the SDP Headquarters instead of the state. Such move, he added is totally strange to the party’s guidelines and regulation.

“There are fundamental criteria of becoming a member in our party, including registration at the ward level, and being a financial member among others; none of it has been fulfilled by Omisore.

“Maybe he is trying to influence the process to his advantage. As far as we are concerned, he is just the party admirer, not a member.

“Our National Leader, Olu Falaye has made it clear to all of us that the party should not be allowed to be hijacked by anybody, it is on this we stand,” he said.

Ishola went further to list the names of aspirants on the platform of the party to include Yemisi Oladeji, AbdulWakeel Adeola, and Munirudeen Atanda.

Omisore had earlier dumped his party, PDP to obtain the nomination and expression of interest form for SDP election.

He told journalists on Friday that he will win the September 22, Osun State governorship election if he emerges as the SDP candidate for the election.

Omisore made the pledge when he obtained the nomination and expression of interest form for the election at the SDP National Secretariat in Abuja.

Osun Election: Why I Formed A Coalition With APC – Omisore