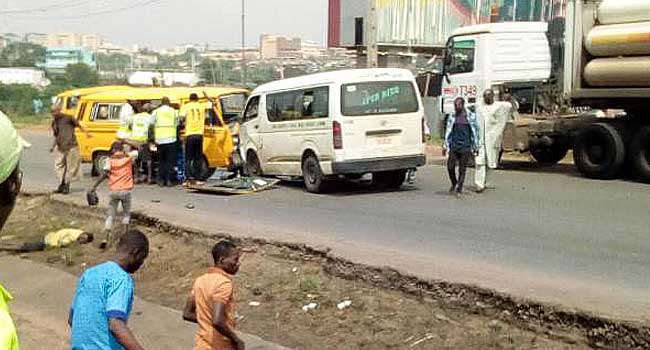 A fresh accident has occurred Friday, along the Otedola Bridge axis of Berger in Lagos, barely 24 hours after a tanker exploded around the same spot.

According to the Rapid Response Squad (RRS), two vehicles, a commercial bus and a Toyota Hiace colluded inward Lagos, opposite the scene of Thursday’s accident.

The RRS said the incident was a result of reckless driving on the part of the commercial bus driver who was on high speed against the traffic.

“Reckless Danfo driver speeding on 1 way had a head-on collision with Toyota Hiace bus entering Lagos opposite scene of yesterday’s tanker fire. The buses have been moved from obstruction while wounded passengers hospitalised”.

Reckless Danfo driver speeding on 1 way had an head -on collision with Toyota Hiace bus entering Lagos opposite scene of yesterday’s tanker fire. The buses have been moved from obstruction while wounded passengers hospitalised. @Gidi_Traffic @followlasg pic.twitter.com/WZvTf0EiWO

Men of the Lagos State Emergency Management Agency (LASEMA) and other security officials were on ground for rescue operations.

Yesterday, a fuel-laden tanker exploded along the same bridge after its brake was said to have failed.

The tanker was heading out of Lagos towards the Lagos-Ibadan Expressway when the crash occurred, engulfing at least 50 vehicles, leaving nine persons dead and four others injured.

Eyewitnesses, however, said the death toll could be higher as many people were trapped in their cars at the time of this report.