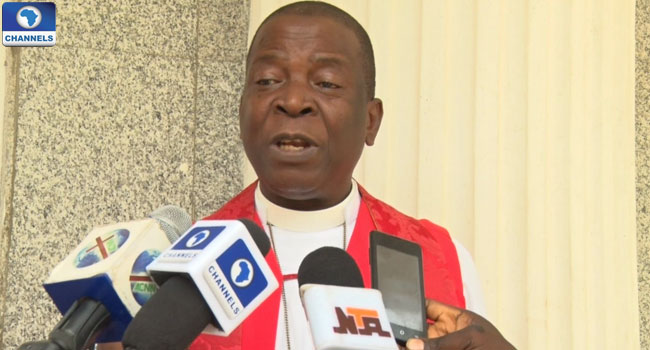 The Primate of the Anglican Communion of Nigeria, Nicholas Okoh has asked the Federal Government to do all it can to bring an end to the wanton killings across the country.

During a sermon on Sunday in Ijebu Igbo, Ogun State, the Bishop said the armed herdsmen who have been responsible for the increased killings since the start of the year, ought to be disarmed.

“These people ought to be disarmed because a situation where a section of the country will be armed and the rest don’t having anything, we cannot move forward,” he said.

Speaking further, he appealed to those involved in rustling cattle and killing their fellow men to stop the evil act.

“This appeal goes to those who steal cows, if you are one of them or you know such people, tell them to stop stealing cows.

“For you to take a cow and pay with your life is not worth it. It’s not a good exchange.

“The Second appeal goes to those who kill human beings, to stop killing Nigerians for whatever reason because if this killing does not stop, it is a bad thing that will bear no good fruit,” the Bishop said.

Also speaking on the killings, the Bishop of the Anglican Diocese of Kaduna, Timothy Yahaya had on Friday, demanded that the killer herdsmen be labelled as a terrorist group just as the Indigenous People of Biafra (IPOB) was declared as one.

In the most recent attacks in Jos, the Plateau  State capital, at least 86 persons were confirmed killed by suspected herdsmen during the attack on Gashish district of Barkin Ladi Local Government Area of the state.

Since a wave of killings took the country by storm, throwing families into mourning and displacing Nigerians, there have been calls on President to shake up the country’s security set up.

There have also been calls for the removal of the security chiefs, especially the Inspector-General of Police, Mr Ibrahim Idris.

In February, the Senate had called for the removal of Mr Idris over the increased violence and killings across the country, especially in Benue State.

The calls for his removal followed reports that he had failed to comply with the President’s directive to relocate to the state, days after suspected herdsmen struck and killed 73 people.

Also, the security agencies have been accused of complicity in the killings with former Minister of Defence Lt General Theophilus Danjuma accusing the military of colluding with killer herdsmen.

President Buhari has, however, retained all the security chiefs and the heads of other security agencies.

In reaction to the reports that the IGP had failed to comply with his orders, he confessed that he did not know the IGP had “disobeyed” the order.

He added that as a loyal leader, he would engage the IGP for inquiries explaining that he was loyal to those under him, whether or not they were loyal to him.

“At every level, you have to be loyal to people below you. Whether that person is loyal to you or not is totally a different thing,” President Buhari said at the time.

Lalong Reacts To Victory, Says It Is Time To Build Enduring Legacy For Plateau