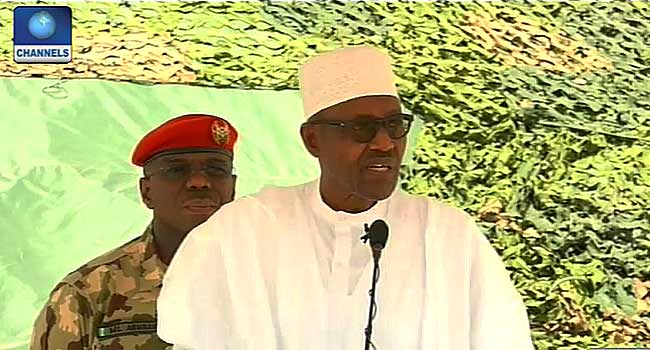 President Muhammadu Buhari says the military has continued to record more successes in its fight against insurgents in the country, even as more Boko Haram members continue to surrender to troops.

The President said this on Friday while addressing guests at the Nigerian Army Day celebration 2018 in Monguno, Borno State.

According to him, this year’s celebration is in line with this administration’s key cardinal policies which are security, economy, and anti-corruption.

He said, “It is gratifying to hear on daily basis, the progress of our gallant troops as they carry out clearance operations along the fringes of Lake Chad waters and northern Borno.

“Members of the Boko Haram insurgents now surrender willingly in their numbers to our troops.

“I am happy to inform Nigerians that all other forms of security challenges in other parts of the country are being tackled by our security agencies.

“Our nation is safe again, thanks to the efforts of our security agencies,” he stated.

The President, however, admitted that the challenges bedeviling the nation are not completely over, especially in the area of security.

But according to him, although violent acts are still being perpetrated by “those desperate to cause mayhem”, the government will continue to do its best to fish them out and ensure they are punished.

“This does not mean there are no challenges.

“There are pockets of violence in several states, some deliberately initiated by disgruntled persons who have lost all arguments and are desperate to cause mayhem as a way of seeking relevance.

“We shall fish them out and punish them according to the provision of the law,” the President said.

Biden Warns Of Nuclear ‘Armageddon’ After Russian Threats On Ukraine