Buhari Assures ICC Of Free And Fair Elections In 2019

President Muhammadu Buhari on Tuesday, in the Netherlands, assured that the 2019 general election in Nigeria will be free, fair, and peaceful

The President made this promise while delivering a keynote address at the 20th anniversary of the International Criminal Court (ICC) at the Hague, Netherlands. He said contrary to the tragic incidents that characterised the 2011 general elections, all hands are on deck to ensure the conduct of 2019 elections will be peaceful.

‘‘Nigeria is preparing to conduct general elections in 2019. I assure you that all hands are on deck to prevent any recurrence of such tragic incidents,” he said.

It will be recalled that scores of people were killed in parts of the country in the wake of the violence that broke out after the 2011 elections in Nigeria. The international community had to conduct preliminary investigations into some of the incidents that trailed the elections.

President Buhari, however, said this will not occur in 2019, vowing that, “We shall do everything possible to ensure that Nigeria witnesses the conduct of free, fair and peaceful elections in 2019.”

Buhari is in the Netherlands to participate in activities to commemorate the 20th anniversary of the adoption of the Rome Statute of the International Criminal Court (ICC), at The Hague. 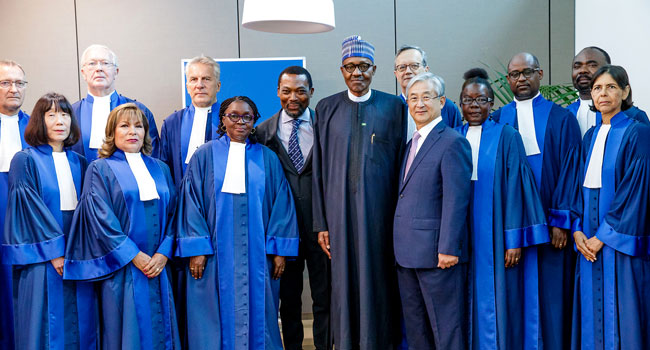 President Buhari in a group photo with Judges of the Criminal Court ahead of his Keynote address at the 20th Anniversary of the International Criminal Court (ICC) at the Hague, Netherlands on 17th July 2018.Special Adviser to the President on Media and Publicity, Femi Adesina, in a statement on Tuesday, stated that Buhari also called on the States Parties to support the International Court with jurisdiction over serious cases of corruption and illicit financial flows by state actors.

“A strong and effective ICC has the potential to send a powerful message about the international community’s commitment to accountability, a message that will be heard by both victims and perpetrators. Equally, a strong and effective ICC demonstrates the international community’s commitment to the rule of law.

“A strong and effective ICC can also act as a catalyst for other justice efforts, expanding the reach of accountability. These could include serious cases of corruption by state actors that severely compromise the development efforts of countries and throw citizens into greater poverty,” Buhari said.

He added that, as the African Union Champion on Anti-corruption, issues relating to cases of illicit financial flows where countries are complicit and obstruct repatriation of stolen assets are dear to his heart.

The President also appreciated the judges of the Court for electing ‘‘a cherished son of Nigeria’’ as President.

‘‘Let me start by congratulating you, Judge Chile Eboe-Osuji, on your election as President of the International Criminal Court, and also thank the judges of the Court for electing you, a cherished son of Nigeria. Nigeria is very proud of you, Mr President,’’ he said.

President Buhari is the only President invited to grace the 20th anniversary of the adoption of the ICC Rome Statute.