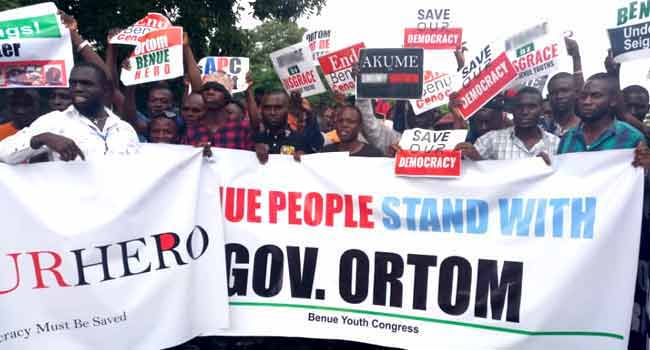 Youths in Benue State have stormed the streets of Makurdi to protest and condemn the alleged brutality by police in the state.

They accused the police of partisanship in the political crisis between Governor Samuel Ortom, as well as Senator George Akumre and leaders of the All Progressives Congress (APC) in the state.

The large crowd of protesters took to the streets of the state capital on Wednesday, bearing banners with various inscriptions to condemn the political crisis in the state and declare their support for the governor.

They also called on President Muhammadu Buhari to direct the Inspector General of Police, Mr Ibrahim Idris, to urgently withdraw the police from the Benue State House of Assembly Complex.

The protesters warned that lawmakers in the state should be allowed to do their job unhindered, to ensure the dividend of democracy to the people.

The political crisis in the state is not unconnected to the impeachment of Mr Terkimbi Ikyange as Speaker of the Benue State House of Assembly whom the lawmakers replaced with Titus Uba on Tuesday last week.

Ikyange, a member of the All Progressives Congress (APC), was impeached after a motion of no confidence sponsored by Richard Ujege who represents Konshisha State constituency.

The following day, the people of Benue woke up to the news of Governor Samuel Ortom’s defection from the APC to the Peoples Democratic Party (PDP).

The governor, who has since decried the manner of running the affairs of the ruling party in the state, noted that his defection followed due consultations with the people.

The crisis took a different dimension when the police barred the 22 lawmakers who impeached Mr Ikyange from gaining access to the legislative chamber for plenary.

On Monday, the former Speaker and seven other APC members of the Assembly consequently served an impeachment notice on Governor Ortom, a move which the National Assembly described as unconstitutional.