Aim Of Defectors Is To Stop Buhari’s Re-election – Ndume 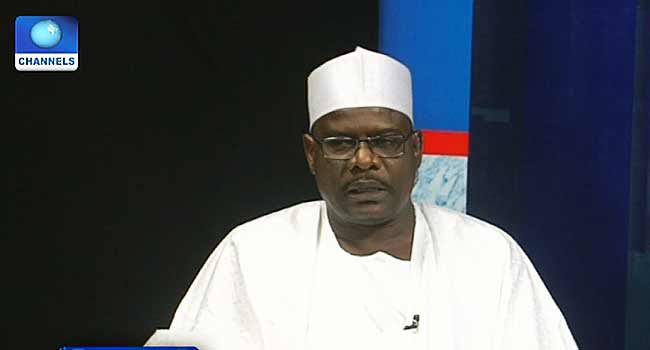 The senator representing Borno South, Ali Ndume, has taken a swipe at some of his colleagues who defected to the People’s Democratic Party (PDP) from the All Progressives Congress (APC).

Speaking to journalists in Maiduguri on Saturday, he explained that most of them have corruption questions to answer and are therefore doing everything they can to stop the president’s re-election in 2019.

“This is a gang up which is targeted to Buhari by politicians that are afraid.

“The war against corruption is not going to be compromised by President Muhammadu Buhari and people feel that this war is going to get to them if he gets another term.

“So, that’s why you see a conglomeration of people of the same character saying, “let’s get rid of this man first”.

Ndume also mocked the PDP calling it a dead party with 12 people jostling for the presidential ticket in their desperation to oust Buhari.

“There is only one presidential slot in the PDP and right now there are 12 people going for the same presidential ticket. But the strange thing is that they are working together and their objective is to get Buhari out,” he said.

Ndume Accuses Saraki Of Shutting Down NASS Over Personal Issues
2019: Saraki’s Defection Not A Threat To APC, Buhari’s Chances – Ndume

The senator had in an earlier interview with Channels Television, described the PDP as a “dying party” adding that although some issues may not have been handled properly within the APC, the PDP was not any better.

“Everybody knows that PDP is a dying party, in fact, it is a bad brand and that’s why I think they’re rebranding.

He further stated that the defections, even that of key figures like the Senate President, Bukola Saraki, would not affect the chances of the APC or President Buhari in the 2019 general elections.

“When you lose even one person, especially a senator or the Senate President, you’re losing a key figure but that is not to say that anybody is indispensable in any way.

“You can’t say Saraki is not important but I’m saying that he cannot do irreparable damage to the APC or the chances of President Muhammadu Buhari,” he said.