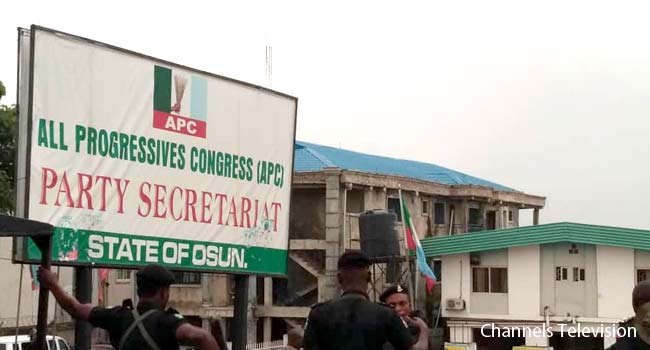 Nine members of the All Progressives Congress (APC) working committee in Osun State have defected to the Action Democratic Party (ADP).

The party officials in a letter of resignation jointly signed and addressed to the chairman of the party, Gboyega Famodun, said that they took the decision after due consultations with their mentors, close political associates the public and lovers of the party.

The state officers were led by the Deputy State Chairman of APC, Alhaji Azeez Issa Adesiji.

While declaring their membership for ADP at the party secretariat along Biket Area, Osogbo, Adesiji said that 580 local government executive members from across 25 local government councils of the state as well as 5,620 ward executives of the APC are defecting along with them.

He explained that they are defecting into the ADP which they described as a credible alternative, because of impunity and undemocratic practices in their former party.

Adesiji cited nepotism, godfatherism, impunity of the hugest order, unconcerned attitudes of the decision makers, abandonment of party members at the ward, local government and state levels AS reasons why it became difficult to remain in the APC.

“We also objected the idea of Osun State being run as an output of another state and the principle of fairness and even development in which the creation of Osun State was agitated has been abandoned by APC cabal in Osun State.

“With the aforementioned above reasons, myself and others here present and many more of our followers at home have chosen the path of honour by resigning our membership from APC and informing the good people of the state and country at large of our decision to move en masse into the vibrant and dynamic Action Democratic Party.

The State Chairman of ADP, Honourable Toye Ola Akinola, said he was glad about the development and therefore, assured the defectors of great bemefits for their action.

He said that they have automatically become bonafide members of the ADP with their action, stressing that the party will work assiduously with their support and that of the people of the state to take over the state from APC.

Akinola further stated that the mass defection of APC members into the ADP is in phases because more members have indicated their interest to join them.

He said that the party will soon embark on sensitization and enlightenment of residents of the state on the logo and other forms of identity for the people.

Meanwhile, the Director of Publicity, Research and Strategy of APC, Barrister Kunle Oyatomi said if the news of their defection was indeed true, the party (APC) wished them.

He said that their defection could not stop APC from winning the September 22 governorship election in the state.

“It is a minus to us but that minus can be ignored,” Oyatomi said.