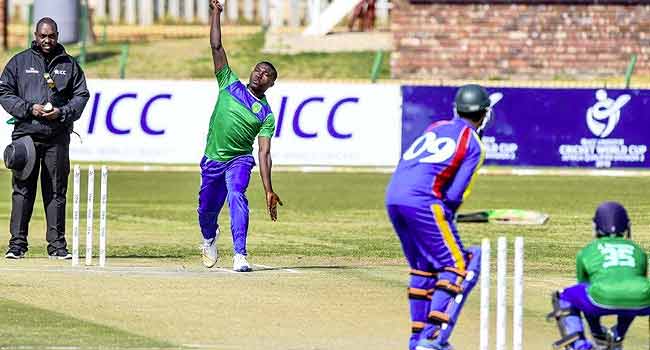 The ICC U-19 World Cup Africa Division 2 qualifiers semi-finals in Potchefstroom, South Africa are well underway with a lot at stake as the winners will automatically qualify for Division 1 and join Namibia, Uganda and Kenya.

The youngsters from Tanzania, Nigeria, Sierra Leone, and Mozambique have earned their right to be in the Last-Four and hope to continue with their rich vein of form as they aim to be among Africa’s elite.

Thirteen-year-old Haroun Kamara was Sierra Leone’s latest star turn at the ICC U-19 World Cup Africa Division 2 qualifiers, as his all-around display saw his side cruise to a fourth straight win.

Kamara, 10 days short of his 14th birthday, picked up four Swaziland wickets for 16 with the ball, before opening the batting and adding a breezy 27 to his performance.

Swaziland had won the toss and elected to bat first, but they were shot out for 81, in 35.3 overs.

Sierra Leone have impressed with bat and ball thus far, and they again applied the squeeze upfront.

Only Jawad Muhammad, with 22 from 44 balls, hung around for the Swazis, who all crumbled against the pressure.

In response, 82 was never going to trouble Sierra Leone’s well-stocked batting, and they wrapped up the chase inside 11 overs.

Captain George Ngegba (48) and Kamara added 60 in the first eight overs before they both fell with the end in sight.

Sierra Leone goes on to the semi-finals and looks like they will take some beating.

In the other match of the day, also in Group A, Tanzania booked their place in the playoffs, thanks to a well-paced chase against Rwanda.

Having been invited to bat first at the Witrand Cricket Field, Rwanda grafted to 134 all out after 40.1 overs.

Parfait Mugisha (29) again played his part, before Yvan Shema (36) and Amitie Iradukunda (34) brought some respectability to the total, with some middle-order grit.

Martin Sayal had struck two blows upfront with the new ball for Tanzania, and he returned with two more to close the innings.

That left the batsmen with a target of 135, which they chalked off with more than half their innings to spare.

Gokul Das (29 off 42 balls) was the mainstay, before Aahil Jasani’s classy 43 not out wrapped up the points.

Jasani struck five boundaries along the way, as Tanzania won comfortably, with 27.5 overs to spare.