Raid: Clark Condemns Officers’ Dismissal, Says They Were Made ‘Scapegoats’

Elder statesman, Edwin Clark, on Friday faulted the police leadership for dismissing the three inspectors who raided his home.

The Ijaw leader believes the officers led by an Assistant Superintendent of Police (ASP), who has also been suspended, could not have embarked on the operation without the knowledge of the police authorities.

“Why make these boys (the police officers) scapegoats?” Clark questioned when he received Former Vice President Atiku Abubakar and Governor Ifeanyi Okowa of Delta State at his residence in Abuja.

“For someone to say that they didn’t know, these boys were on their own and, therefore, they should be dismissed; Why deceive Nigerians? If you made a mistake, say you’ve made a mistake,” Clark said.

The elder statesman claimed that the Assistant Inspector General of Police (AIG) in charge of Federal Intelligence instructed the search of his home.

He wondered why the police authorities that should know the masterminds and conspirators of the invasion went after the four junior officers, whom he said were merely carrying out instructions from their superiors.

Police ‘Must Come Clean’ On Raid On Clark’s Residence – Oshiomhole 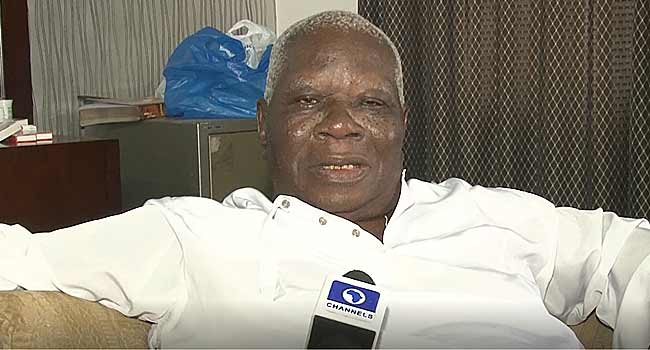 Clark explained, “While they were here doing the search, Ambassador (Boladei) Igali was here. He phoned an AIG in charge of Intelligence and the man said he wanted to speak to the boys (the policemen).

“He did, and one would have expected that if these boys were on their own he could have asked them to go back, but after that, they went on.”

The Ijaw leader stressed that no one should pretend or deceive Nigerians. He insisted that the police officers who came to his house to carry out the raid did not do it on their own.

He said it was wrong to give the impression that the Force leadership was not aware of the search, adding that the officers could not have gone to the court on their own to secure a search warrant and raid his house the same day.

On Tuesday, the ASP led the three inspectors to raid Clark’s residence in Asokoro, an action which sparked a widespread criticism across the country.

Hours later, the police said they were unaware of the search and described the raid as an “illegal and unauthorised” operation, while a team of top police officers visited the elder statesman to apologise to him.

The three inspectors were later dismissed and the ASP suspended, while the informant involved was charged to a court for giving false information and telling falsehood that misled police action.