There Is No Serious Shortage Of Doctors In Nigeria – Health Minister 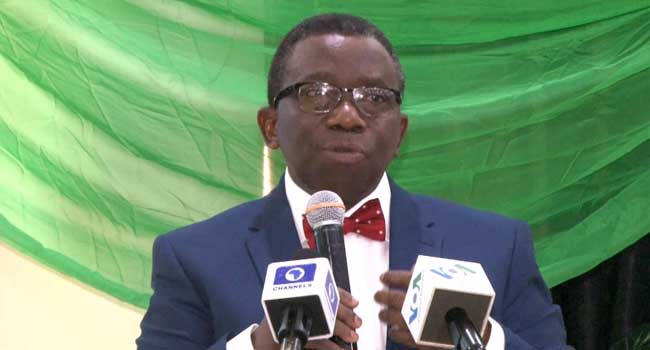 The Minister of Health, Professor Isaac Adewole, says according to the data obtained from the Medical and Dental Council of Nigeria, there is no serious shortage of doctors in Nigeria.

Adewole noted that what is perceived as a shortage of doctors is actually the uneven distribution of practicing doctors within the country.

He said this is as a result of the emigration of Nigerian trained doctors.

“There is no serious shortage of doctors in Nigeria, people are free to disagree with me but I will tell you what the situation is across in Nigeria and many other African countries.

“The data obtained from the Medical and Dental Council of Nigeria as of May 30, revealed that 88,692 doctors are registered in their books. Of these doctors, only 45,000 are currently practicing and that gives us a ratio one doctor to 4,088 persons,” he said.

Adewole said this on Friday during the opening ceremony of the 38th Annual General Meeting and Scientific Conference of the National Association of Resident Doctors of Nigeria (NARD).

According to him, the ratio of one doctor to 4,088 patients in Nigeria is better compared to other African countries.

He also explained that the challenge in Nigeria Health sector is the uneven distribution of medical personnel in Nigeria.

According to the Health Minister, there is a huge imbalance between the distribution of doctors to the urban and rural areas. He added that the Federal Government is however concerned about the issue of brain drain and has set up a committee to tackle it.

“Federal Government is concerned about the disparity and has set a special committee to look into the issue of the brain drain and what can be done to keep doctors.”

Adewole also urged States and the Federal Government to leverage on available manpower to bridge the gaps of deficiency to improve healthcare delivery.

Health Minister Appears Before Senate Over State Of Teaching Hospitals

Senate Asks Health Minister To Appear Before It On Tuesday