Bayelsa Floods: We Will Stand By You, Osinbajo Assures IDPs

The Vice President, Professor Yemi Osinbajo, has assured the victims of flood in Bayelsa State that the Federal Government will not leave them to their plights.

He gave the assurance on Friday during a visit to the camp of Internally Displaced Persons (IDP) in Igbogene area of the state.

“On behalf of President Muhammdu Buhari, we will stand by you and whatever you need we will provide,” Professor Osinbajo was quoted as saying in a series of tweets by his Senior Special Assistant on Media and Publicity, Mr Laolu Akande.

He was very touched that the people welcomed him warmly, despite the flood and all they have been through.

The Vice President stressed that the Federal Government has a responsibility to ensure that the welfare of Nigerians across the country was being taken care of.

“It is our duty as government to ensure that we take care of the people,” the Vice President told the displaced persons.

“That’s why I am here to see first-hand what is going on so that we will understand the type and quality of response to take further.”

Professor Osinbajo also met with a woman who put to bed recently at the camp.

VP & Gov just now in Igbogene interacting with a mother and child affected by the floods pic.twitter.com/b1RlyohN2Y

Vice President Osinbajo was received in Yenagoa, the state capital by Governor Seriake Dickson and top government officials in Bayelsa.

The visit comes weeks after some communities in the state were hit by floods, forcing scores of residents to relocate. 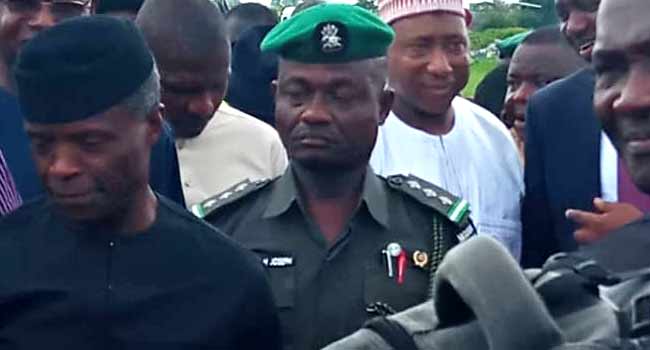 African Nations Call Out Climate Injustice Ahead Of COP27

California Says New Cars Must Be Zero Emission By 2035