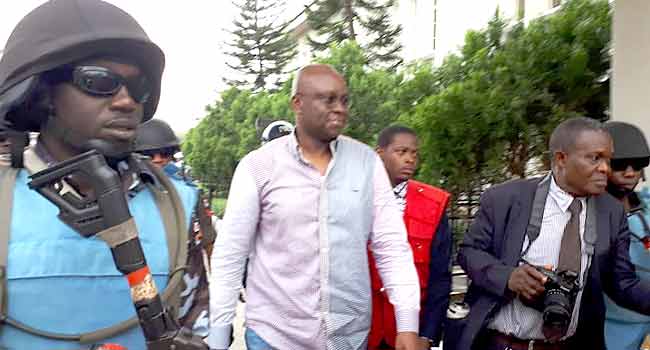 The Federal High Court in Lagos has granted former Governor of Ekiti State Ayodele Fayose, bail in the sum of N50 million.

The presiding judge, Morenikeji Olatoregun, granted the bail on Wednesday, adding that he must provide two sureties who must issue a ₦50 million bond in a reputable bank, as well as possess three years of tax clearance.

She also directed that the former governor must deposit his international passport with the court.

The Economic and Financial Crimes Commission (EFCC) had on Monday arraigned Fayose on 11 counts of alleged money laundering, amounting to ₦2.2 billion.

Fayose’s lawyer, Kanu Agabi, urged the court to grant his client bail, based on self-recognizance on the ground that he voluntarily submitted himself to the Economic and Financial Crimes Commission (EFCC).

But the commission initially opposed the bail request, saying that on the day he (Fayose) arrived at the EFCC’s headquarters, he was accompanied by ‘hoodlums’ who were willing to attack their officials.

The commission also argued that they are still tracing other properties acquired by the former governor with the proceeds of the alleged laundered funds.

According to the EFCC, Mr Fayose received ₦1.2 billion to fund his 2014 gubernatorial campaign in Ekiti State, a sum they said he ought to have known formed part of proceeds of an unlawful act.

But the former governor and his company, Spotless Limited, pleaded not guilty to all the charges.

The trial has now been adjourned till November 19.