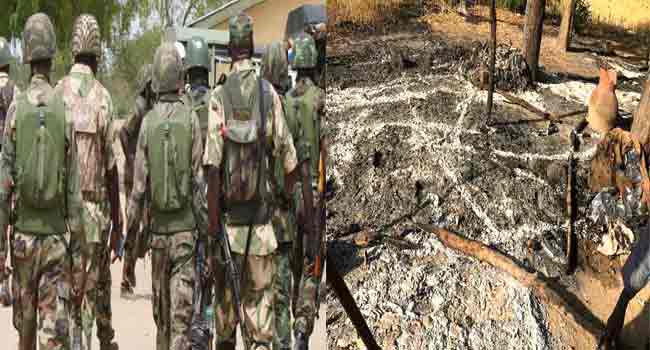 The Nigerian Army has confirmed the ‘attempted attack’ by Boko Haram terrorists on two villages of Kofa and Dalori in Konduga Local Government Area of Borno State.

Giving an account of the incident, it said via its Facebook page on Thursday that one civilian was found dead following the attack which occurred on Wednesday night.

The Army, however, affirmed that troops of 251 Task Force Battalion successfully foiled the attack on Kofa and the Internally Displaced Persons (IDP) camp in Dalori.

It said, “The terrorists gained access through a bush path behind the village in four vehicles and some motorcycles. They ransacked the market in front of the IDP camp.

“On sighting own troops that were mobilised to the area, they set some houses and the market ablaze and fled along Maiduguri-Bama Road. However, one civilian was found dead.”

The Army added that troops were assisting the villagers who ran into the bush during the incident to return to their homes while the Borno State Fire Service has contained the inferno.

Meanwhile, Channels Television reported that no fewer than 15 people were killed during the terrorists’ invasion while two other villages were also attacked.

They are Abba Malumti and Gozari, also in Konduga LGA and close to Maiduguri, the state capital.

During a visit to Kofa, witnesses said the insurgents set ablaze the Imam of the village along with four members of his family.

Some residents of Abba Malumti and Dalori also told Channels Television that eight and two people were killed in the villages respectively.

They said security operatives on the ground faced superior firepower as over 200 insurgents reportedly stormed the villages.

See the photos of the attack below;