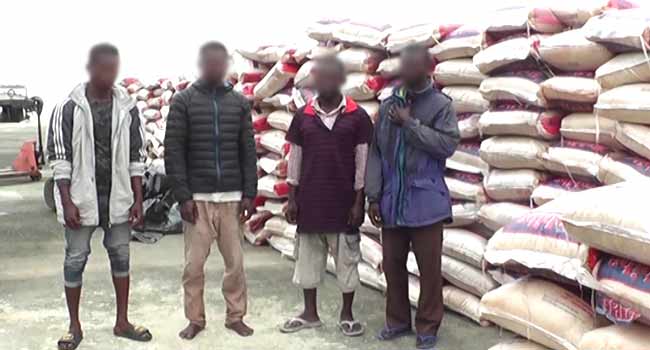 The Nigerian Navy has arrested four suspects in connection with the smuggling of several bags of rice into Calabar from Cameroon through the Calabar waters in Cross Rivers state.

The suspects were intercepted on Monday while trying to navigate their way into the state capital.

Commander of the NNS Victory, Commodore Julius Nwagu, paraded the suspects at the NNS Jetty a day after they were arrested.

According to him, the smuggled rice valued at more than N6 million were shipped into the waterways from Cameroon using a wooden boat.

The commodore decried the continuous act of smuggling contraband goods into the country and warned those involved to desist from such acts.

He stated that the Navy would remain committed to the Federal Government’s fight against the importation of illegal goods into the country.

He also commended the command for the success stories being achieved in this regard.

The suspects were subsequently handed over to the Nigeria Customs Service for investigation and prosecution.