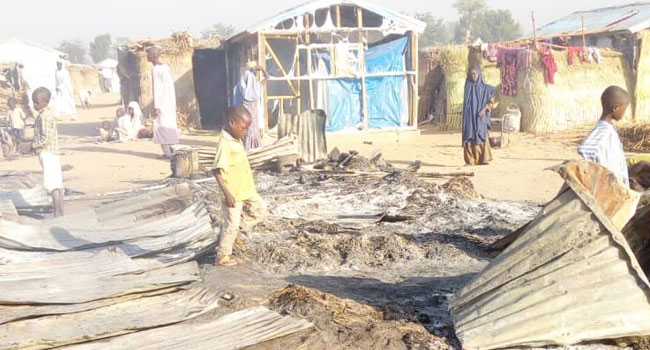 One person has been reportedly killed and 65 houses burned after suspected Boko Haram insurgents attacked some communities on the outskirts of Maiduguri, the Borno State capital.

Hundreds of residents reportedly fled into Maiduguri following the attacks around the Bale Shuwa-Judumri axis at Jiddari Polo in Jere Local Government Area on Saturday evening.

According to eyewitness reports, the insurgents invaded the area in an attempt to enter the capital but were repelled by troops of the Nigerian Army and the Civilian Joint Task Force (CJTF).

In a statement by the Zonal coordinator for the National Emergency Management Agency North East (NEMA), Bashir Idris confirmed the attack to Channels Television.

He stated that 65 houses were burnt while 200 cows, 300 flocks of sheep and goats were carted away.

Idris, however, explained that the “injured victims have been provided with first aid and humanitarian needs assessment is being conducted to enable the mobilization of immediate relief assistance.”

Channels Television observed that there was panic around the Giwa barracks area of Maiduguri in the neighbourhood of the attack, with evidence of buildings set ablaze by the attackers.

The attack follows renewed violence by members of the sect despite several efforts by security agencies to curb the menace.

How I Fought Boko Haram To Regain My Freedom – Traveller