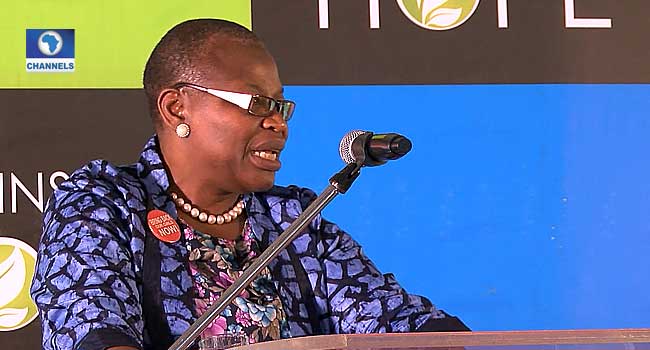 The presidential candidate of the Alliance Congress Party of Nigeria (ACPN), Dr Oby Ezekwesili on Monday unveiled her manifesto and programs for the 2019 presidential election.

Dr Ezekwesili presented the manifesto at a press conference in Lagos, which she titled “From Poverty Central To Prosperity: How The ‘Oby’ Ezekwesili Presidency Will Lift 80+ Million Nigerians Out Of Poverty”.

The ACPN candidate described the document as a roadmap, adding that she has a dream of an inclusive and prosperous country where there is equality of opportunity for all.

She said, “The excessive powers of the Federal Government is partially responsible for the stunted growth and poverty of the states and regions.

“We shall lead an economic-based dialogue for correcting the structural imbalance that has hobbled the regions and states and created the failure of our fiscal federalism in its practice.

“The failure of the power sector is the clearest proof of what can happen when the Federal Government refuses to let go of its control.

“This failure is responsible for the situation where 190 million Nigerians manage about 3,500 megawatts of power, whereas, South Africa with 50 million people generates in excess of 50,000 megawatts.

“How can a nation be productive without access to energy. We need complete and true deregulation of the sector. We can lift many of our citizens out of poverty by filling the infrastructure gaps.

“It is not enough for the fuel subsidy to go. Our government will also deregulate the entire oil sector”.

I Have No Preferred Candidate In Lagos LG Poll – Tinubu

‘The Whole World Is Laughing At Us’, Ezekwesili Tells Buhari After Kankara Schoolboys’ Return