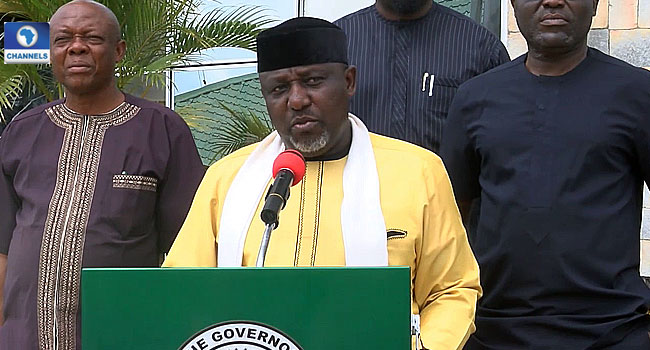 Imo State Governor Rochas Okorocha has raised an alarm over what he described as a fake court order.

The governor on Thursday alleged that the fake court order was used to remove Uche Nwosu’s name as the governorship candidate of the All Progressives Congress (APC) in the state.

He also added that a purported court injunction served on the Independent National Electoral Commission (INEC) to publish Hope Uzodinma’s name as the governorship candidate of the All Progressives Congress (APC) in the state is fake and has no authenticity from any court or judge in Nigeria.

“Information reaching me shows that a fake court order was used in removing the name of the candidate of APC in Imo State which is Nwosu. That report seems to be very authentic and that is what INEC may have relied on to do what they did.

“This is because as at today in the morning till around 2:00 p.m., Uche Nwosu’s name was still there to be published in line with the two court orders supporting his candidature.”

He, therefore, called on both the leadership of the party and INEC to explain the reasons for the alleged deliberate attempt behind the removal of Uche Nwosu’s name as the governorship candidate of APC in Imo State.

The governor has had a running battle with the party’s chairman is challenging the party and the INEC on the authenticity of the court order that informed INEC’s decision to publish Senator Hope Uzodinma’s name as the party’s governorship candidate in Imo State.

Withholding My Certificate Of Return Can Cause Tension In Imo – Okorocha