Funke Bucknor has confirmed the death of her sister, Radio Presenter and On-Air Personality, Tosyn who died on Monday night, following complications from the Sickle-Cell disease.

In her Instagram post, while paying tribute to her sister, Funke said, Hmmmmm…My heart is heavy…but in all things, we give thanks to God.

“My darling sister and besto Tosyn passed away last night due to complications from sickle cell.
“Love you” ……. 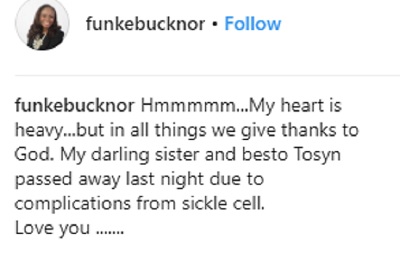 Tosyn Bucknor was reportedly found dead by her husband, Aurelien Boyer, when he arrived at his home from work on Monday.

She died at the age of 37 and was confirmed dead upon arrival at the hospital.

She was involved in various humanitarian projects, especially stigmatisation on sickle cell patients, cancer awareness, amongst other things.

Google Trends: Top Ten Deaths Nigerians Looked-Up The Most In 2018

Tunde Kelani’s ‘Dazzling Mirage’ Gets New Trailer Ahead Of Premiere