Save Our Brexit: May Urges UK Public To Back Her 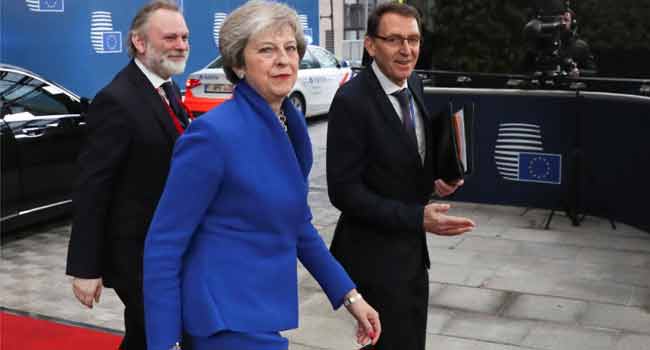 Prime Minister Theresa May made a dramatic direct appeal to the British public to support her deal to exit the European Union on Sunday even as backing from her own party for the agreement appeared to elude her.

May is meeting the other 27 EU leaders in Brussels this weekend to sign off on a divorce treaty and political declaration to end more than 40 years as part of the world’s biggest trading bloc.

In an open letter to the nation, May said she would campaign “heart and soul” to get her Brexit deal through Britain’s parliament – an increasingly unlikely prospect given stiff opposition from some of her own Conservative Party lawmakers and allies in Northern Ireland’s Democratic Unionist Party (DUP) alike.

“It will be a deal that is in our national interest – one that works for our whole country and all of our people, whether you voted “Leave” or “Remain,” she said.

Sunday newspapers said different factions in her own party were preparing alternative Brexit plans to keep Britain closer to the EU should her deal fail as most expect.

That included a plan being hatched by close allies such as finance minister Philip Hammond and work and pensions minister Amber Rudd, reported The Sunday Times without citing sources.

The Sunday Telegraph said there were plans on both sides of the English Channel for a “Plan B”. One such was a Norway-style relationship with Brussels, under which Britain would have a more certain “exit mechanism” from the EU’s rules but would be unable to end the free movement of workers from the bloc – the most politically contentious element of Brexit.

Johnson Wants Britons To Cycle Way Out Of Lockdown

Coronavirus Cost Global Tourism $320 Billion From January To May – UN

Brexit Talks Move To London After Tough Week In Brussels