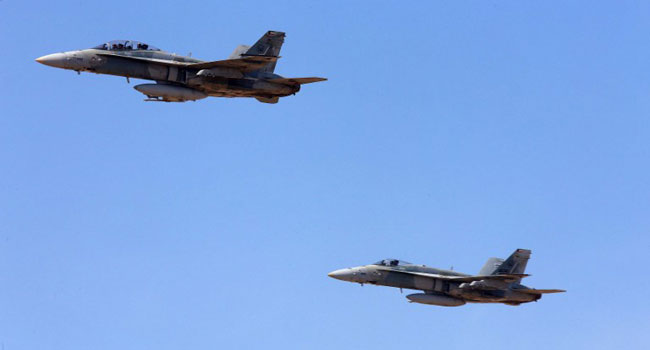 Israeli jets bombed several areas in southern Syria and near Damascus on Thursday drawing retaliatory fire from the ground, a monitoring group said.

The Israeli military made no comment on the reported strikes, during which Syrian air defences opened fire for the first time since the deadly downing of a Russian transport plane in September, the Syrian Observatory for Human Rights said.

“Israeli forces bombarded for an hour position in the southern and southwestern suburbs of Damascus as well as in the south of Syria at the border of Quneitra province,” Observatory chief Rami Abdel Rahman said.

“Our air defences fired on hostile targets over the Kisweh area and downed them,” the official SANA news agency reported, citing a military source.

The Israeli military denied that any of its aircraft were hit, while not commenting on the reported strikes.

“Reports regarding an IDF (Israeli military) aircraft or an airborne IDF target having been hit are false,” it said in an English-language statement.

It said a Syrian surface-to-air missile was fired in the direction of an open area of the Israeli-occupied Golan Heights but it was unclear if it had hit Israeli-held territory.

Israel has carried out hundreds of air strikes in neighbouring Syria against what it says are Iranian targets, many of them in the area south of Damascus.

Abdel Rahman said there are “weapons depots belonging to the Lebanese Hezbollah (group) as well as Iranian forces” in Kisweh.

Iran and Russia are the government’s key allies in the civil war that has raved Syria since 2011, and Moscow’s intervention in 2015 dramatically turned the tables against the rebels.

Moscow pinned responsibility for the downing on Israel, saying its fighter jet used the larger Russian one for the cover, an allegation Israel disputed.

The move raised fears in Israel that its ability to rein in its arch-foe Iran’s military presence in its northeastern neighbour would be sharply reduced.

Abdel Rahman said Thursday was the first time Syria’s air defences had been called into action since the September downing and the delivery of advanced new Russian missiles.

Israeli Prime Minister Benjamin Netanyahu had told Moscow his government would continue to hit hostile targets in Syria to prevent Iran from establishing a military presence across the border.

He added that Israel would “continue security coordination” with Russia.

Indonesia Pulls Out Of Annual Mecca Pilgrimage Over COVID-19 Fears