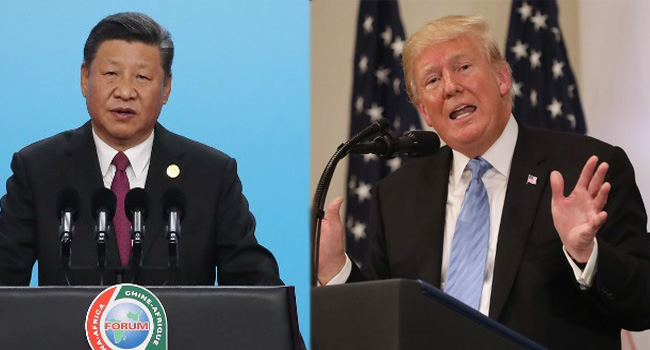 US President Donald Trump said Tuesday the talks to resolve the trade dispute with China had begun already and would last for 90 days unless they were extended.

The clock started ticking on December 1, when Trump met in Buenos Aires with China’s leader Xi Jinping and agreed to work towards an agreement to roll back the exchange of tariffs on hundreds of billions of dollars in two-way trade.

However, Trump held out the possibility of an extension.

“The negotiations with China have already started. Unless extended, they will end 90 days from the date of our wonderful and very warm dinner with President Xi in Argentina,” Trump tweeted.

After the meeting, Washington agreed to hold off on Trump’s threat to raise tariffs on $200 billion in Chinese imports to 25 percent beginning January 1, leaving them at the current 10 percent rate.

In return, Washington said China would purchase “very substantial” amounts of US agricultural, energy, industrial and other products.

Trump on Sunday said China also would “reduce and remove” tariffs of 40 percent on cars, though Beijing has yet to confirm the move.

US Trade Representative Robert Lighthizer will lead the talks to see “whether or not a REAL deal with China is actually possible,” Trump tweeted on Tuesday. “China is supposed to start buying an Agricultural product and more immediately.”

American farmers have been hit hard by China’s retaliation on US farm goods, especially soybean exports, which have plummeted.

Trump warned that although he and Xi want to get to an agreement “remember, I am a Tariff Man.”

“When people or countries come in to raid the great wealth of our Nation, I want them to pay for the privilege of doing so,” he said.

In a subsequent tweet, Trump said he would “happily sign” a “fair deal” that addresses US concerns, should one be reached with Beijing.

Monkeypox To Be Renamed Mpox, Says WHO