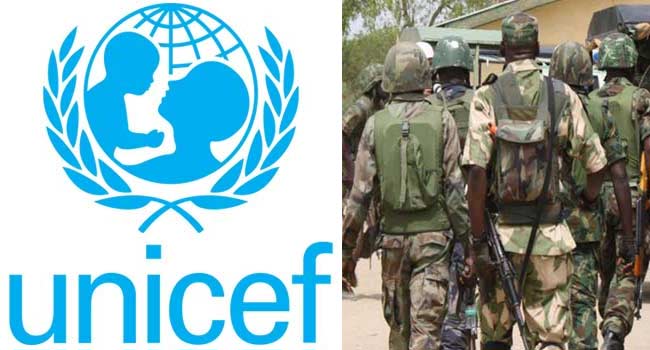 The Nigerian Army has lifted its suspension of the operations of in the United Nations International Children’s Emergency Fund (UNICEF) in the North East.

The decision followed an emergency meeting between the Theatre Command Operation Lafiya Dole and representatives of UNICEF on Friday.

Deputy Director of Public Relations of the theatre command, Colonel Onyema Nwachukwu, disclosed this in a statement.

He explained that the Army rescinded its decision following the intervention of well-meaning and concerned Nigerians in the matter.

Colonel Nwachukwu revealed that during the meeting, the Theatre Command admonished the representatives of the organisation to desist from activities inimical to national security and capable of undermining the ongoing fight against terrorism and insurgency.

The command he said urged the UNICEF representatives to ensure they share information with relevant authorities whenever induction or training of new staff was being conducted in the theatre.

“Consequently, after extensive deliberations on the need to seek modalities to work harmoniously with the security agencies in the theatre of operation, the Theatre Command has henceforth lifted the three months suspension earlier imposed on UNICEF activities in North Eastern Nigeria,” the statement said.

Earlier, global human rights organisation, Amnesty International condemned the decision of the Army to suspend UNICEF operations in the region.

The Director of Amnesty International Nigeria, Osai Ojigho, had described the action of the Army as an act of intimidation.

Ojigho said the suspension of UNICEF would deprive those whose lives have been devastated by the Boko Haram conflict in the region from receiving much-needed humanitarian assistance.

“We see the suspension of UNICEF as part of a wider drive to intimidate international humanitarian and human rights organisations who are working to save lives in this devastating conflict,” she alleged.