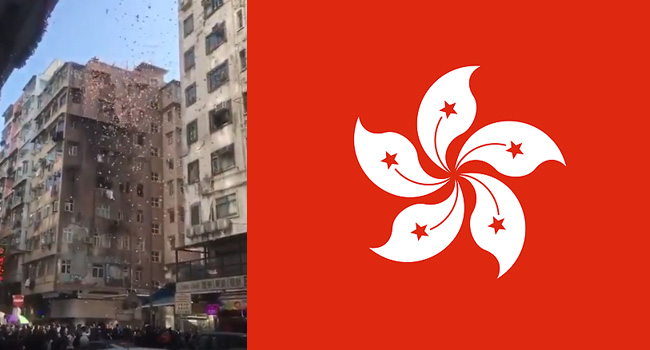 A hail of banknotes rained down onto the streets of a working-class neighbourhood in Hong Kong, sending bystanders into a frenzy — but the man who claimed to be behind the stunt was arrested Sunday.

Bills worth thousands of Hong Kong dollars were seen fluttering to the ground from the top of a building, as people tried to grab the falling cash and others filmed the scene on their smartphones.

A man who runs a cryptocurrency Facebook page live-streamed the prank Saturday in the Sham Shui Po district.

“I wonder if any of you believe money could fall from the sky?” he said, before the camera panned to the top of a nearby building which saw flurries of HK$100 ($12.80) bills flying down like confetti.

Wong Ching-kit — known online as “Coin Young Master” — said in a Facebook post that he wanted to “help the poor by robbing the rich”.

But the 24-year-old was arrested Sunday for causing disorder in a public place, after he drove back to the neighbourhood in his Lamborghini.

Crytocurrency has been huge source of wealth for some in recent years, and 2017 saw the meteoric rise of hundreds of virtual currencies led by bitcoin.

Woman Arrested For Eating Out Without Hijab In Iran

Nobel 2022 Prize Season Under Shadow Of War In Ukraine