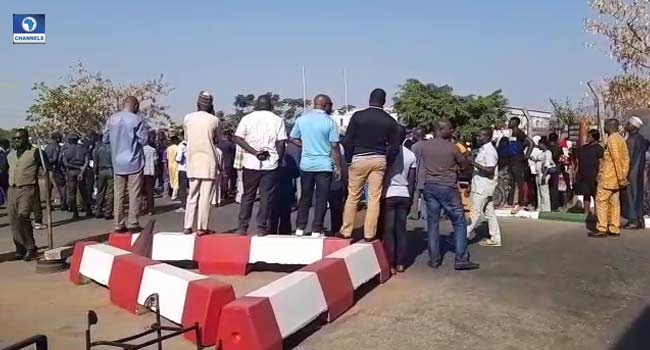 The All Progressives Congress (APC) has said that the shameful development in the National Assembly which has seen parliamentary workers shut down the legislative complex following the commencement of their four-day strike is a sad reminder of what Nigerians witnessed under the Peoples Democratic Party (PDP) administration.

The PDP’s 16-year rule was characterised by such incidences of unpaid salaries, ghost workers and a shocking disdain for workers’  welfare, claims the APC in its statement signed by Mallam Lanre Issa-Onilu, the party’s national publicity secretary.

The statement read: “While the minority PDP usurpers who parade themselves as the National Assembly leadership have promptly paid themselves their allowances, National Assembly workers under the umbrella of Parliamentary Staff Association of Nigeria (PASAN) are owed their duly earned 28 percent increase in their salaries since 2010.

READ ALSO: Ekweremadu Projects ‘A President Of Igbo Extraction’ In 2023

“Perhaps, if the National Assembly leaders have focused on their core legislative business and operations rather than resort to subterfuge with the sole intent of undermining the APC government, the welfare of parliamentary workers would not have been taken for granted.

“Nigerians will recall that the President Muhammadu Buhari-led administration in one of its first actions as a government-approved federal government bailout to states to settle salaries owed workers. That is the stuff of people-centered governance which the APC represents. A worker deserves his wages!

“We have now learnt that the parliamentary workers have blocked all entrances into the National Assembly complex and cut off essential services like power and water supply; effectively crippling any form of activity within the premises.

“The APC calls on the Senate President, Senator Bukola Saraki and the Speaker of the House of Representatives, Yakubu Dogara to do the needful by attending to the demands of the parliamentary workers. The welfare of workers is a cardinal policy of the APC administration. We, therefore, call on the PDP led National Assembly to save the country this national embarrassment”.

According to a statement signed by Sani Omolori, Clerk of the National Assembly, the directive was passed after a meeting of the joint leadership of the two chambers with the management and representatives of the security agencies.

The meeting was called by the political leadership to listen to the management led by the Clerk of the National Assembly (CNA) on efforts made so far to address the grievances of the striking staff.