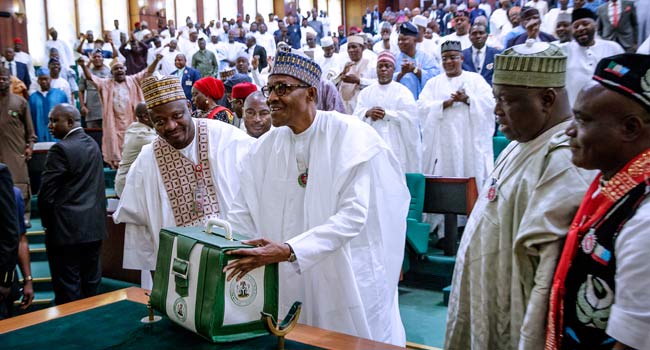 President Muhammadu Buhari has proposed N8.83 trillion budget for 2019 to the joint session of the National Assembly.

The presentation of the budget was presented under a rowdy session with opposition lawmakers repeatedly booing the President as he listed his achievements.

The budget proposal was prepared based on the following assumptions: Oil price: $60 per barrel of oil production rate: 2.3 million barrels per day exchange rate: N305 to $1 Real GDP growth: 3.01 per cent inflation rate: 9.98 per cent.

Below is a part of the 2019 budget breakdown.

PRIORITIES FOR THE 2019 BUDGET

The 2019 Budget Proposal is intended to further place the economy on the path of inclusive, diversified and sustainable growth in order to continue to lift significant numbers of our citizens out of poverty.

The underlying drivers of the 2019 revenue projections have been adjusted to reflect current realities. On the expenditure side, allocations to Ministries, Departments and Agencies of Government were guided by the 3 objectives of the ERGP, which are, (i) Restoring and Sustaining Growth; (ii) Investing in our People and (iii) Building a Globally Competitive Economy.

The 2019 Budget proposal is based on the following assumptions:
a. Oil price benchmark of $60 per barrel;
b. Oil production estimate of 2.3 million barrels per day, including condensates;
c. Exchange rate of N305/$;
d. Real GDP growth of 3.01 per cent; and
e. Inflation Rate of 9.98 per cent.

President Buhari noted that the recent softening in international oil prices and the considered view of most reputable analysts is that the downward trend in oil prices in recent months is not necessarily reflective of the outlook for 2019.

He, however, said that his administration will continue to monitor the situation and respond to any changes in the international oil price outlook for 2019.

“With regard to oil production, I have directed the NPPC to take all possible measures to achieve the targeted oil production of 2.3 million barrels per day”.

“We have allowed N305 billion ($1 billion) for under-recovery by NNPC on PMS in 2019. We will continue working to bring it downwards so that such resources are freed up to meet the developmental needs of our people.

“Let me also take this opportunity to address and clarify the under-recoveries or subsidy on petrol. In a period of economic challenges where purchasing power is weak, we must reduce some of the burdens on Nigerians.

“The problem with subsidies in the past is abuse and corruption. Today the government through the NNPC is the sole importer of PMS and therefore, the under-recovery is from the NNPCs trading account. This means the possibility of some marketers falsifying claims is removed”.

The estimate for non-oil revenue consists of N799.52 billion from Companies Income Tax (CIT), N229.34 billion from Value Added Tax (VAT) and Customs Duties of N302.55 billion. We have reduced our expectation from Independent Revenues to N624.58 billion. Other revenues expected in 2019 include various recoveries of N203.38 billion, N710 billion as proceeds from the restructuring of government’s equity in Joint Ventures and other sundry incomes of N104.11 billion.

A total expenditure of N8.83 trillion is estimated for 2019. This includes grants and donor funds of N209.92 billion. This provision is less than the 2018 FGN appropriated expenditure estimate of N9.12 trillion. However, it is higher than the N8.6 trillion originally proposed by the Executive Branch to the National Assembly for 2018.

The budget deficit is projected to decrease to N1.86 trillion (or 1.3 per cent of GDP) in 2019 from N1.95 trillion projected for 2018. This reduction is in line with our plans to progressively reduce deficit and borrowings.

a. Recurrent Costs of N4.04 trillion;
b. Debt Service of N2.14 trillion;
c. Statutory Transfers of about N492.36 billion;
d. Sinking Fund of N120 billion which will be used to retire maturing bond to local contractors; and
e. Capital Expenditure of N2.031 trillion including capital supplementation but excluding the capital component of Statutory Transfers.

STATUTORY TRANSFERS
The provision for Statutory Transfers in 2019 is N492.36 billion which is a seven per cent decrease from 2018. However, transfers to Niger Delta Development Commission (NDDC) and Universal Basic Education Commission (UBEC) are projected to be higher as they are directly related to the quantum of oil revenue.

DEBT MANAGEMENT
The sum of N2.14 trillion has been provided for debt service. Of this amount, 80 per cent is to service domestic debt which accounts for about 70 per cent of the total debt. Although our national debt is within sustainable limits, we need to increase our domestic resource mobilization to bring down our debt-revenue ratio over the medium term.

The allocation to these Ministries represent significant increases over votes in previous budgets, underscoring our commitment to increase investment in national security and human capital development.

PERSONNEL COSTS
Personnel costs, estimated at N2.29 trillion, currently amount to nearly 40 per cent of projected revenues. Substantial savings have been made from wider use of the Integrated Personnel Payroll Information System platform.

“I have directed that all MDAs must implement the IPPIS by March 2019. We have made provisions for staff promotion arrears and recruitments by the armed forces, police and para-military agencies”.

The 2018 Budget was based on a benchmark oil price of $51/b, oil production of 2.3 million barrels per day and an exchange rate of N305 to the dollar. Based on these, the Federal Government’s aggregate revenue of N7.17 trillion was projected to contribute to the 2018 Budget of N9.12 trillion. The projected deficit of N1.95 trillion (or 1.73 per cent of GDP) was to be financed mainly by borrowing.

In 2018, average oil production up to the end of the third quarter was 1.95 mbpd, as against the estimated 2.3 mbpd for the entire year.

The average market price of Bonny Light crude oil was higher (an average of $74 per barrel as at October) than the benchmark price of $51.

As at the end of the third quarter, the Federal Government’s actual aggregate revenue was N2.84 trillion, which is 40 per cent higher than 2017 revenue. The overall revenue performance is 53 per cent of the target in the 2018 Budget largely because some one-off items are yet to be actualized. “We have now rolled this revenue item over to 2019”.

The total appropriation of N9.12 trillion, N4.59 trillion had been spent by 30th September 2018 against the prorated expenditure target of N6.84 trillion which represents 67 per cent performance.

The President disclosed that the debt service and implementation of non-debt recurrent expenditure, notable payment of workers’ salaries and pensions are on track. Despite the delay in the passage of the 2018 budget on the 20th of June, the sum of N820.57 billion had been released for capital projects as at 14th December 2018.

“We have carried over capital projects that were not likely to be fully funded by year-end 2018 to the 2019 Budget”.

Full Text: We Must Live Together As Brothers And Sisters, Buhari Tells Kaduna Residents