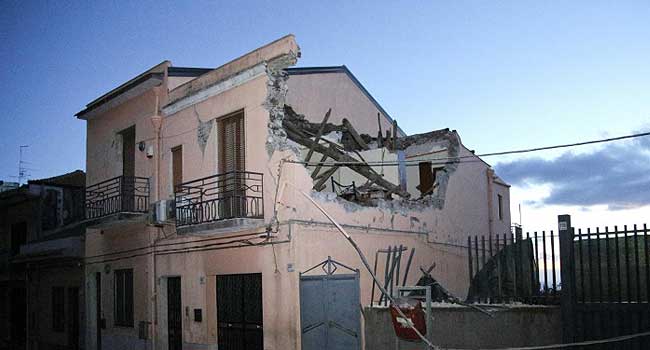 An earthquake with a magnitude of 4.8 hit an area north of Catania on the slopes of Mount Etna in Sicily early on Wednesday, damaging buildings and injuring about 30 people, officials said.

It occurred two days after Etna, Europe’s highest and most active volcano, erupted, sending a huge column of ash into the sky and causing the temporary closure of Catania airport on Sicily’s eastern coast.

The earthquake hit at 3:19 a.m. (0219 GMT), prompting many people to run out of their homes and sleep in cars. It was felt strongly because its epicentre was a relatively shallow one kilometre deep, officials said.

Television footage showed damage to older buildings in the towns of Santa Venerina and Zafferana Etnea. Several of the area’s centuries-old churches appeared to suffer the most damage. They were empty at the time of the quake.

About 30 people suffered injuries, mostly from falling masonry as they fled from their homes, officials said. About 10 were taken to hospital by ambulances, the others were taken by friends and family members. None of the injuries were serious.

Three Arrested In Italy Over Fake Kidnapping That Turned Real

Italy Bans Batch Of AstraZeneca Jab But Plays Down Risks