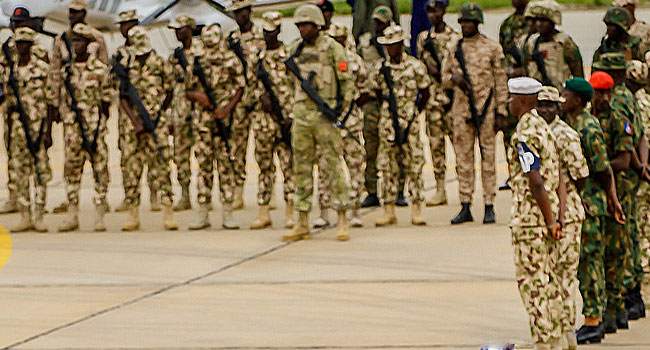 The Chief of Army Staff, Tukur Buratai, have advised troops fighting the insurgency in the North East to be more professional and maintain a good fighting spirit.

Major General Olufemi Akinjobi, the Commander Sector 3 of the Operation Lafiya Dole gave the advice on Tuesday when he visited troops locations within Sector 3 Area of Responsibility to deliver the goodwill message of the Chief of Army Staff.

Akinjobi urged the troops to bring to bear their basic tactics training in the fight against Boko Haram terrorists.

READ ALSO: It Is Evident You Have Defeated Boko Haram, Buratai Tells Troops At Christmas

He expressed satisfaction with the conduct of troops and urged them to be alert at all times. He added that the Chief of Army Staff utmost priority is the welfare of troops and that of their families.

Some of the locations visited by Akinjobi to deliver the goodwill message include Kinnasara cantonment perimeter defence, Forward Operation Base Kekeno and Cross Kauwa.

Earlier in the day, the Commander, Nigerian Army Corps of Supply and Transport Major General Victor Offiong visited Kinnasara Cantonment Monguno to celebrate Christmas with troops of the Sector.

General Offiong commended the efforts and sacrifices of the gallant troops and encouraged them to keep up the good work.

It will be recalled that the Nigerian Army on Tuesday said Boko Haram terrorists have killed at least 10 soldiers and one police officer in an ambush in Borno State.

[email protected]: Abdusalami Says Many Have Not Learnt Any Lesson

[email protected]: Buhari To Address The Nation From Eagle Square