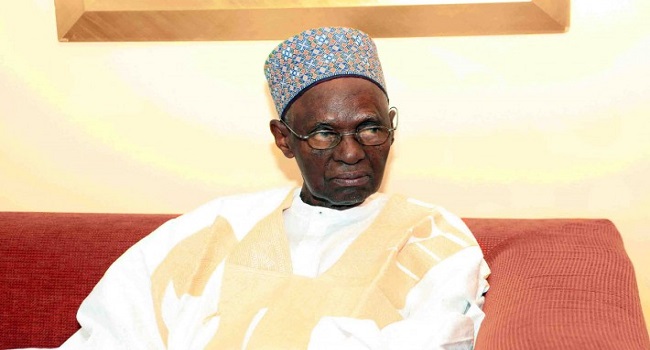 Shagari reportedly died at the National Hospital Abuja on Friday after a brief illness.

The former president died at the age of 93.

His demise was announced on Twitter by both the governor of Sokoto, Aminu Tambuwa and the former president’s grandson, Bello Shagari.

The governor wrote: “I regret to announce the death of former President Shagari who just passed away at National Hospital Abuja.”

I regret to Announce the death of former President Shehu Shagari who just passed away at National Hospital Abuja. May his Soul Rest in Peace. pic.twitter.com/D9GR8vpkbT

I regret announcing the death of my grandfather, H.E Alhaji Shehu Shagari, who died right now after brief illness at the National hospital, Abuja.

Reacting to his death, President Muhammadu Buhari and Ex-ruler, General Ibrahim Badamosi Babangida have expressed sadness at the passing away of the Elder statesman.

In his message, President Buhari described Shagari as an unparalleled patriotic leader.

Similarly, a former military ruler, General Ibrahim Badamosi Babangida has said Nigeria and Africa as a whole have lost a great leader.

IBB said Shagari will be remembered for his tolerance and politics of peace without bitterness.

He described Shagari as a statesman and democrat full of wisdom, counsel, honesty, and transparency.

Shagari was born in the northern Shagari village founded by his great-grandfather, Ahmadu Rufa’i, who was also the Village Head and took the name Shagari as his family name.

With his great wealth of experience in service, Shagari served seven times in a ministerial or cabinet post as a federal minister and as federal commissioner from 1958–1975.

In 1954 Shagari was elected into his first public office as a member of the federal House of Representative for Sokoto west. In 1958, Shagari was appointed as parliamentary secretary (he left the post in 1959) to the Nigerian Prime Minister, Sir Abubakar Tafawa Balewa and that year he also served as the Federal Minister for Commerce and Industries.

From 1959-1960, Shagari was redeployed to the ministry for economic development, as the Federal Minister for Economic Development.

In 1967 he was appointed as the secretary for Sokoto province education development fund. From 1968-1969, Shagari was given a state position in the North Western State as commissioner for establishments.

After the Nigerian civil war, from 1970-1971, Shagari was appointed by the military head of state General Yakubu Gowon as the federal commissioner for economic development, rehabilitation, and reconstruction.

From 1971-75 he served as the Federal commissioner (a position now called minister) of finance. During his tenure as the commissioner of finance for Nigeria, Shagari was also a governor for the World Bank and a member of the International Monetary Fund (IMF) committee of twenty.