Shehu Shagari: 8 Things To Remember About Late Ex-President Of Nigeria 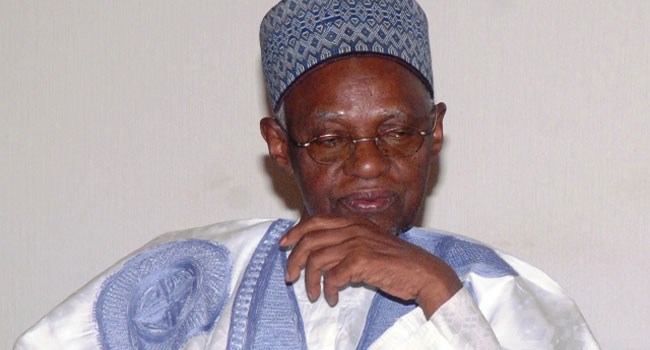 The former president passed on at the National Hospital Abuja, he was aged 93.
Shagari was born on February 25, 1925, he served as the first and only President of Nigeria’s Second Republic (1979–1983).

After his service as president after the handover of power by General Olusegun Obasanjo’s military government.

There were no details as to the cause of his death.

However, beyond details of his death, below are 8 very interesting facts to remember about the lives and times of the Turaki of the Fula Sokoto Caliphate.

Shagari was born in the northern Shagari village founded by his great-grandfather, Ahmadu Rufa’i, who was also the Village Head and took the name Shagari as his family name.

With his great wealth of experience in service, Shagari served seven times in a ministerial or cabinet post as a federal minister and as federal commissioner from 1958–1975.

In 1954 Shagari was elected into his first public office as a member of the federal House of Representative for Sokoto west. In 1958, Shagari was appointed as parliamentary secretary (he left the post in 1959) to the Nigerian Prime Minister, Sir Abubakar Tafawa Balewa and that year he also served as the Federal Minister for commerce and Industries.

From 1959-1960, Shagari was redeployed to the ministry for economic development, as the Federal Minister for Economic Development.

In 1967 he was appointed as the secretary for Sokoto province education development fund. From 1968-1969, Shagari was given a state position in the North Western State as commissioner for establishments.

After the Nigerian civil war, from 1970-1971, Shagari was appointed by the military head of state General Yakubu Gowon as the federal commissioner for economic development, rehabilitation, and reconstruction.

From 1971-75 he served as the Federal commissioner (a position now called minister) of finance. During his tenure as the commissioner of finance for Nigeria, Shagari was also a governor for the World Bank and a member of the International Monetary Fund (IMF) committee of twenty.

3. Man of Many Titles

In 1962, Shagari was made the Turaki of the Fula Sokoto Caliphate by the Sultan of Sokoto Siddiq Abubakar III. Turaki is a title which translates to the officer at court, referring to the sultan’s court at the palace of Sokoto.

Beyond the Northwest, Shagari also holds the chieftaincy titles of the Ochiebuzo of Ogbaland, the Ezediale of Aboucha and the Baba Korede of Ado Ekiti.

Shehu Shagari matriculated at the Teachers Training College, in Zaria, Kaduna, between 1944 and 1952.

Shehu Shagari was a founding member of the National People’s Party in 1978.

In 1979 he was chosen by the party as the presidential candidate for a general election that year, which he won becoming the president and head of state of the Federal Republic of Nigeria.

Shagari ran for a second four-year term in 1983 and won the general election.

Shagari won the 1979 election with the help of his campaign manager, Umaru Dikko.

The campaign had the support of many prominent politicians in the North and among southern minorities.

The party’s motto was “One Nation, One Destiny” and was seen as the party best representing Nigeria’s diversity.

However, on 31 December 1983, Shagari was overthrown by Major General Muhammadu Buhari.

7. Father of Many Children

However, his most visible children are Captain Muhammad Bala Shagari Rtd. and Aminu Shehu Shagari.

On 24 August 2001, his wife, Aisha Shagari, died in a London hospital from a brief illness.

Shagari is reported to have made Housing, Industries, Transportation and Agriculture as the major goals of his administration during the oil boom.

In transportation, he launched some road networks across the country and initiated a program to foster the use of mechanical machinery in farming. It favored large-scale farmers in order to produce mass products.

He is also credited with creating a low-cost housing scheme.

With the oil revenue, Shagari finished building the Kaduna refinery in 1980 which started operations same year.

Also with the oil revenue, Shagari concluded the construction of an additional steel plant and three rolling mills at Ajaokuta, Nigeria.

In 1983 he created the Aluminum Smelter Company of Nigeria at Ikot Abasi, Nigeria.

However, Shagari reduced the share of oil royalties and rents to state of origin from 30 to 2 percent.

Shagari’s government also embarked on a “Green Revolution”, distributing seed and fertilizer to farmers to increase nationwide productivity in farming.

The Ever-Expanding Universe Of ‘Game Of Thrones’