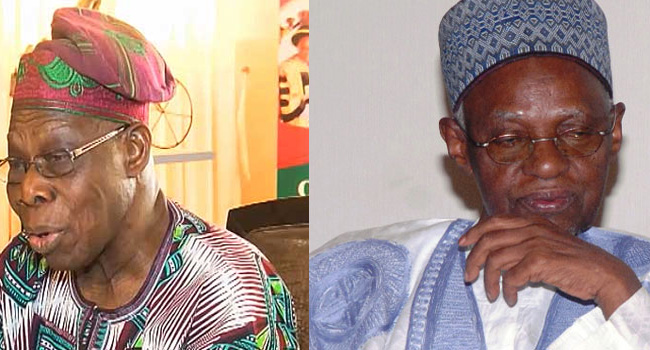 The former President, Olusegun Obasanjo, has commiserated with the government and people of Sokoto State over the death of the First Executive President of Nigeria, Shehu Usman Shagari.

Obasanjo described the late Shagari as a man of honour and an achiever.

“President Shehu Shagari was a man of honour and an achiever. In all

his national assignments, he was forthright, dedicated and showed great commitment in the discharge of his duties”.

In a statement, Obasanjo said, “On behalf of my family and on my own behalf, I wish to commiserate with you, the entire members of his family and the good people of Sokoto State over the passing of this humble, patriotic, amiable and notable Nigerian leader.

“I would like to express my deep respect for the achievements of President Shehu Shagari in the course of his long life as one of the principal actors in Nigeria’s pre-independence and post-independence politics.

“He held various positions as a parliamentarian in the Federal House of Representatives representing Sokoto West in 1954, as a Parliamentarian Secretary 1958-1959, as a Federal Minister and Commissioner in different Ministries and capacities between 1959 and 1975.

“ I remember his role as Commissioner for Finance while he and I served in the government of General Yakubu Gowon. He was thorough.

“And later, I saw him as my successor in government as a democratically-elected President of the Federal Republic of Nigeria between 1979 and 1983. Indeed, President Shagari rendered
outstanding service to our country, and we will remember his services in that respect.

“He was a unifying force for the nation and his contribution to the growth and development of democracy in Nigeria cannot easily be forgotten. In all situations, he lived nobly and he died in nobility.

“Let us bear in mind that we all have the opportunity to act nobly in whatever position we find ourselves. President Shagari died at a time the country and its leadership is in dire need of such leadership, experience and wisdom to tackle the multifaceted challenges facing the nation”.

Obasanjo prayed the Almighty Allah to grant him (Shagari) eternal rest and comfort those he left behind.