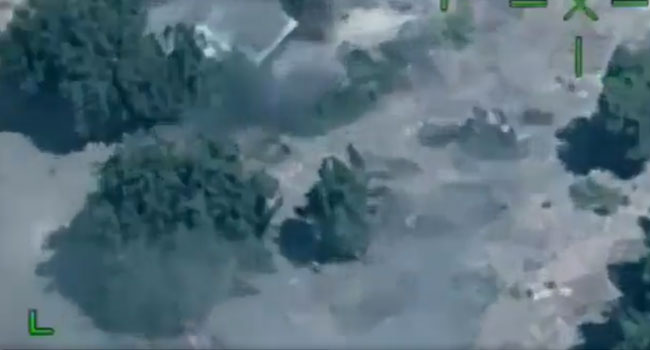 A combat helicopter of the Nigerian Air Force, NAF, on Wednesday got lost while providing close air support to troops of 145 Battalion at Damasak in Northern Borno State.

The development was confirmed in a statement by Air Commodore Ibikunle Daramola, Director of Public Relations and Information of the Nigerian Air Force.

Air Commodore Ibikunle noted in his statement that the details of the incident are still sketchy and will be made known soon when investigations are done.

The full statement by the NAF spokesman reads, “A Nigerian Air Force (NAF) Helicopter was lost in combat while providing close air support to troops of 145 Battalion at Damasak in Northern Borno State.

“The mission was part of the ongoing counterinsurgency operations in the North East. The incident, occurred about 7:45 pm today, 2 January, 2019.

A building used as a meeting venue for Islamic State of West Africa Province, ISWAP, has been destroyed by the Air Task Force (ATF) of Operation LAFIYA DOLE.

The building being used by ISWAP fighters near Baga in Borno State was destroyed on Tuesday, January 1, 2019.

According to a spokesman for the Nigerian Air Force, Air Commodore Ibikunle Daramola, the attack was carried out after “series of Intelligence, Surveillance and Reconnaissance (ISR) missions confirmed that the building was being used as an assembly point by the terrorists”.

Air Commodore Ibikunle said in a statement on Wednesday that the ATF “consequently dispatched a Nigerian Air Force (NAF) Alpha Jet aircraft to attack the building”.

He said a direct hit was recorded on the target leading to significant damage to the structure and neutralization of the occupants.