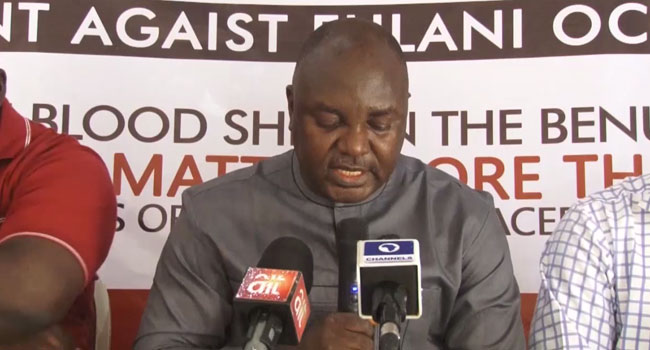 A group of campaigners against open grazing of cattle in Benue State called the Movement Against Fulani Occupation (MAFO), has faulted a report by Amnesty International’s where it allegedly put the number of deaths in Benue State between 2016 and 2018, at 726.

According to the group, almost 10,000 farmers have been killed within the time frame, as against the figure mentioned by Amnesty International.

The legal adviser for the group, Mr Terence Vembe, at a press briefing on Saturday noted that over 3,900 persons were killed in Agatu alone, while scores of persons had been killed in Gwer West, Makurdi, Guma, Logo, Buruku and Kwande Local Government Areas.

“In view of the above and many other observations, MAFO wishes to state as follows: the casualty figure of 726 for Benue State, has been strategically downplayed in order to water down the impact of the crisis of Benue communities and present a different picture to the rest of the world, especially coming from a globally known organization like Amnesty International,” he said.

Vembe, therefore, called on Amnesty International to re-evaluate its report by conducting fresh investigations in the affected Benue communities.

The group also faulted comments credited to Senator George Akume, alleging that the Benue State government is responsible for the killings.