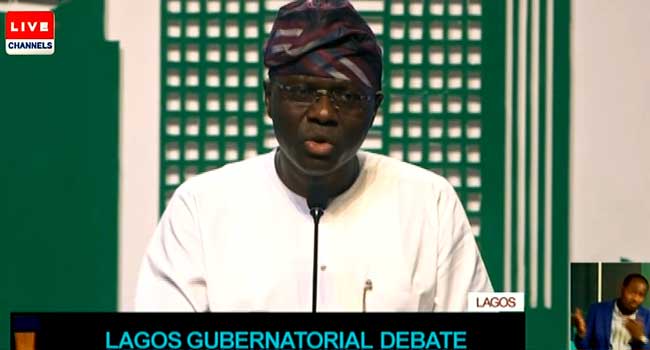 The governorship candidate of the All Progressives Congress (APC) in Lagos State, Mr Babajide Sanwo-Olu, has promised to tackle the problem of traffic jam if elected into office.

With 33 days to the general elections, he vowed to also make the gridlock in the Apapa axis of the state a thing of the past in less than four months.

“First on the list, I will tackle the traffic problem of Lagos frontally,” Sanwo-Olu said during ‘The Platform’s debate which held on Sunday in Lagos.

“Within the first 100 days, I will tackle the gridlock in Apapa … I will make sure that it’s a nightmare and we will not see that again.”

On how he intended to achieve this, the APC candidate disclosed plans to engage the private sector with a productive discourse in which stakeholders would set an agenda for the next four years.

He added that he would convene a town hall meeting to inform the public sector about the new ways of engagement to develop the state.

Sanwo-Olu revealed additional steps aimed at ensuring the decongestion of traffic around the Apapa axis through rail and other forms of transportation.

He said, “For the rail, it is work in progress. There is a blue line that is coming up, there is a red line which in conjunction with the Federal Government has finally been agreed.”

“I’m expecting that within the next two years, we will have rail tracks on the blue line which is from Okokomaiko to Marina – 28km, and we have another red line from Ebute Metta to Agege which is another 36km – 37km.”

The 53-year-old said he has the required experience to lead the state on the path of growth for the next four years, having served as a commissioner with three governors in Lagos.