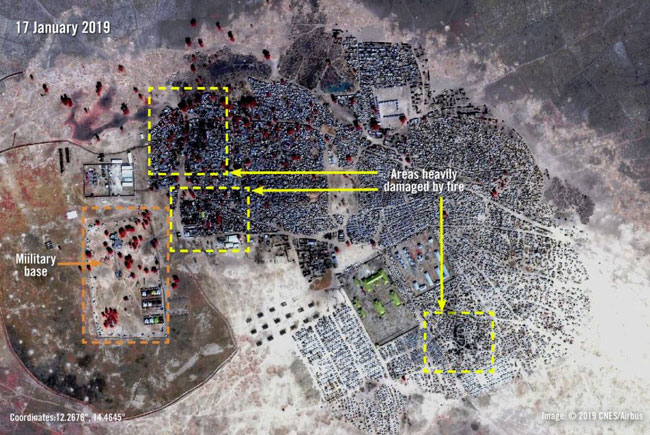 Amnesty International has condemned the attack by Boko Haram terrorists on Rann, a town in Borno State.

The organisation condemned the attack in a statement issued on Friday by its Media Manager in Nigeria, Isa Sanusi, saying that new satellite images showed the devastating aftermath.

According to Amnesty International, more than 9,000 people were displaced from the town which hosts thousands of people already displaced by the Boko Haram crisis.

It also said the attack resulted in large areas being burnt in the west and south of Rann, with more than 100 structures destroyed or heavily damaged by fire – a situation it described as a despicable disdain for life and one that may constitute a war crime.

It, therefore, urged the Nigerian Government to provide immediate humanitarian support for the displaced persons.

“Amnesty International condemns Boko Haram’s despicable disdain for life. This attack clearly targeted civilians and, therefore, may constitute a war crime. The organisation appeals to the Nigerian authorities to provide immediate humanitarian assistance to the thousands of people who have been displaced,” Osai Ojigho, the Director Amnesty International Nigeria was quoted as saying.

“What is happening in Rann shows how vulnerable internally displaced persons are in Nigeria and the need to do more to protect them.”

“Since Monday night’s attack people have been fleeing across the border to Cameroon in their thousands and with every day that passes their condition is becoming more and more desperate. Rann is now almost empty as deadly attacks by Boko Haram have made people too afraid to stay,” said Osai Ojigho.

“The authorities on both sides of the border must provide the supplies and safety that these people require. The Cameroonian authorities must also desist from forcing people to return until conditions are safe and they choose to do so voluntarily,” he added.