‘Just Getting Started’, Serena Says As She Marches Into Last 16 Of Australian Open 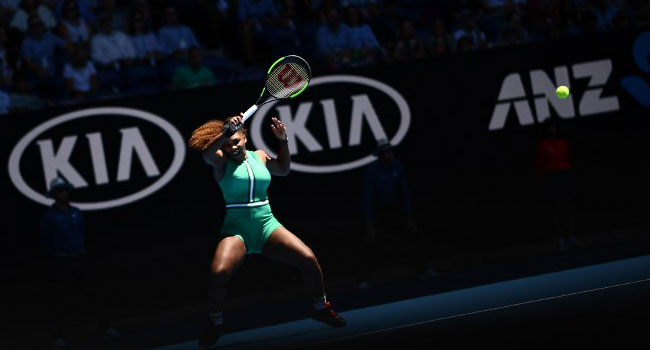 Serena Williams has said there is more to offer as she marched into the Australian Open last 16 Saturday.

Williams said she was still improving after swatting aside Ukrainian teenager Dayana Yastremska 6-2, 6-1 in a Melbourne Park mauling.

The 37-year-old, who is in the hunt for her first Grand Slam since having a baby, comforted the youngster at the net, telling her: “You did amazing, you’re gonna make it, don’t cry”.

But Williams, who is in ominous form and has dropped only nine games in her opening three matches, also had a message for her rivals, saying she was not yet at the top of her game.

Williams will face either sister Venus, who is unseeded this year, or world number one Simona Halep in the next round.

The 37-year-old won her 23rd Grand Slam Down Under two years ago while two months pregnant and is the bookies’ favourite to claim an eighth Australian title, despite being seeded 16th.

Another major would match Margaret Court’s tally and Williams is focused as she chases down the Australian great’s record.

“I’m here, I’m playing as hard as I can and doing the best I can, which is really all I can do,” she said.

Yastremska was not even born when the American won her first major at Flushing Meadows in 1999.

Williams said she did not like to see an opponent so distressed but she appreciated that Yastremska cared so much about trying to win their match and “came out swinging”.

“I kind of liked that. It shows she wasn’t just there to play a good match, she was there to win,” the American said. “She wanted to win. That really broke my heart.”

Her compassion contrasted with Maria Sharapova’s attitude when she left Harriet Dart in tears after serving the Briton a 6-0, 6-0 “double bagel” in the first round.

“There’s no time for that, I’m sorry to say,” the Russian responded when asked if she had any sympathy for her opponent.

Yastremska’s only previous appearance at a Grand Slam was a first round exit at last year’s US Open and she looked like roadkill as soon as Williams raced to a 4-0 lead in the first set.

The Ukrainian managed to hold serve twice in the first set, prompting wild applause from the crowd but was powerless to stop Williams taking the first set 6-2 after 27 minutes.

Williams was equally relentless in the second, breaking Yastremska and allowing the teen to score only four points off her serve as she went up 4-1.

Yastremska had treatment on her right foot but it was only delaying the inevitable and Williams took just a few minutes to bring up match point after play resumed.

She hit her first chance into the net but completed the win after Yastremska sent a return wide.