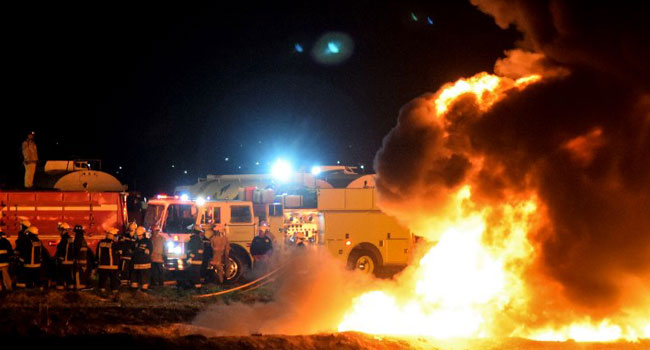 An explosion and fire has killed at least 66 people who were collecting fuel gushing from a leaking pipeline in central Mexico, the Hidalgo state governor said on Saturday.

“The toll that we have until a few minutes ago… is 66 dead, while 76 are injured,” said the governor, Omar Fayad.

Forensic specialists on Saturday worked among the charred corpses at the scene, which was guarded by soldiers as a smell of fuel still hung in the air.

Scores of locals with jerrycans and buckets had been collecting gasoline that was gushing from the pipeline when the blast occurred on Friday, according to witnesses.

Video taken in the aftermath showed people fleeing the scene, screaming for help, as an enormous fire lit up the night sky in Tlahuelilpan, Hidalgo state, 65 miles (105 kilometres) north of Mexico City.

The tragedy comes as the federal government wages a highly publicized war on fuel theft, a problem that cost Mexico an estimated $3 billion in 2017.

President Andres Manuel Lopez Obrador travelled to the scene in the early hours of Saturday.