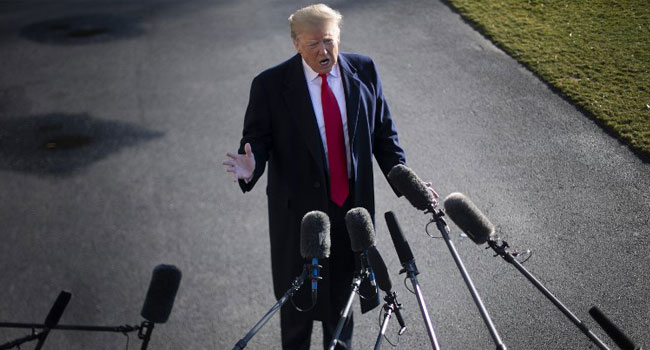 US President Donald Trump attended a silent, solemn ceremony on Saturday to receive the remains of four Americans killed in northern Syria in an attack claimed by the Islamic State group that took place after he declared the jihadists “largely defeated.”

Trump flew to Dover Air Force Base in Delaware with Secretary of State Mike Pompeo and Acting Defense Secretary Patrick Shanahan, where they walked slowly up the cargo ramp of the grey C-17 cargo plane that had brought home the remains.

Inside, a chaplain said a prayer and a loud “Amen” could be heard.

Trump and the rest of his delegation, which included senior army and navy officers, emerged from the plane after several minutes to stand at attention, saluting.

A six-member Navy ceremonial team wearing camouflage then brought out a flag-draped casket bearing Scott Wirtz, a former Navy SEAL working as a Department of Defense civilian when he was killed.

About 100 people in uniform and civilian dress who had connections to the victims also watched as the ceremonial team slow-marched the casket to a waiting van.

Then came caskets with the other victims: a soldier, a navy cryptologic technician, and a civilian contractor.

Trump had earlier tweeted that he would be in Dover “with the families of 4 very special people who lost their lives in service to our Country!”

Nineteen people including the four Americans were killed in a suicide bombing at a small restaurant in the flashpoint northern Syrian town of Manbij on Wednesday. It was the deadliest attack to hit US troops since they deployed to Syria in 2014 to assist local forces against IS.

It came after Trump’s announcement last month that he was ordering a full withdrawal of the 2,000 US troops from Syria, shocking allies and leading to the resignation of defense secretary Jim Mattis.

Senior US officials have since given contradictory statements about US intentions, but the Pentagon said it had begun the withdrawal, although it remained unclear how long that would take.

After sweeping across swathes of Syria and Iraq in 2014, the IS jihadists’ cross-border “caliphate” has been erased by multiple offensives and is now confined to a tiny embattled enclave in eastern Syria close to the Iraqi border.

But despite the stinging defeats, IS has proved it is still capable of carrying out deadly attacks using hideouts in the sprawling desert or sleeper cells in the towns.

Trump Hits Out At May After Leak Of Damning Cables