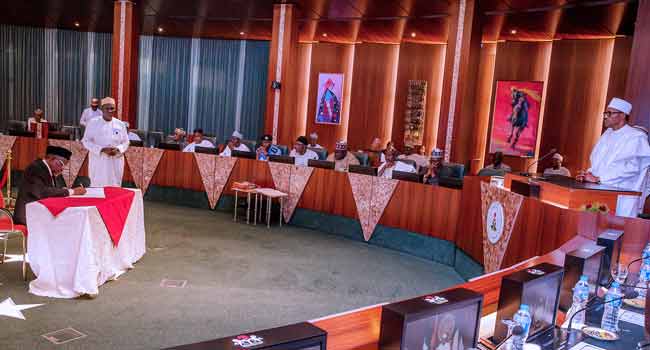 There is no political motive behind the suspension of Justice Walter Onnoghen as the Chief Justice of Nigeria (CJN), the Presidency has said.

Special Adviser to President Muhammadu Buhari on Media and Publicity, Mr Femi Adesina, stated this in a telephone interview with Channels Television on Friday.

“As far as the President is concerned, this is just about fighting corruption,” he said on Politics Today.

He had explained that he took the decision at the request of the Code of Conduct Tribunal (CCT) over allegations that Justice Onnoghen failed to declare his assets.

The development has triggered mixed reactions across the country, including a call on the National Assembly by the Peoples Democratic People (PDP) to take legislative actions against the President.

But Adesina insisted that if there were people saying the President’s action has some political undertones despite the clarification he has made, such people have a right to their opinion.

He said, “As to what is on the President’s mind, he wrote a speech just before the swearing in of the acting CJN.

“He said the moral authority of Justice Walter Onnoghen has been wounded. He said it’s been so wounded that he should just have stepped down till the case is concluded, and that is why he had to now use the power vested in him, as directed by the Code of Conduct Tribunal.”

The presidential aide also faulted the claims that the President told the media that he was not aware of Justice Onnoghen’s arraignment.

He, however, said it was the Vice President, Professor Yemi Osinbajo, who said the President was aware only on the Saturday preceding the arraignment on a Monday.

Adesina stressed that President Buhari had stated that the suspension of Justice Onnoghen was strictly in line with the anti-corruption war of his administration.

He quoted the President as saying, “Fellow Nigerians, we can only stand a chance to win the fight against corruption and position our dear nation for accelerated development when we stand together to contend against it.”