Femi Falana, a Senior Advocate of Nigeria, has asked Justice Walter Onnoghen to quit the bench after his suspension must have been lifted by President Muhammadu Buhari.

The human rights activist made this call on Sunday while featuring as a guest on Channels Television’s Politics Today.

He said, “The government should as a matter of urgency, lift the suspension on the Chief Justice since the Chief Justice as so much to on his own admitted that he did not declare his assets, he should do the needful by calling it quits”.

Falana said after the suspension has been lifted, the Chief Justice should quit the bench because he has already admitted that he failed in his duty to declare his asset as required by the constitution.

The Senior Advocate further argued that the Executive and the Judiciary arms of government have failed Nigerians with regards to the case of Justice Walter Onnoghen. 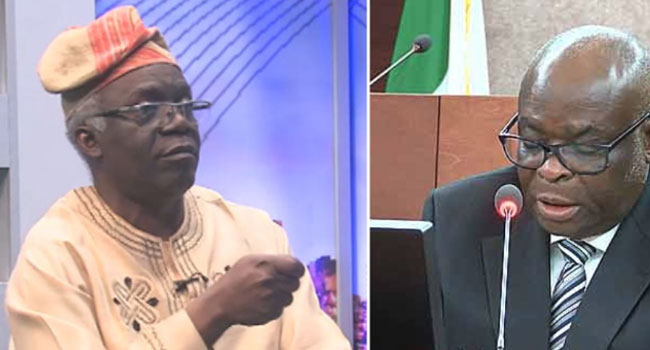 He said it was wrong for President Muhammadu Buhari to have suspended Justice Onnoghen based on an ex parte order of the code of conduct tribunal.

He said by so doing the President did not follow due process, stressing that the government must learn to obey the rule of law.

“You can’t fight corruption without following due process,” Falana said.