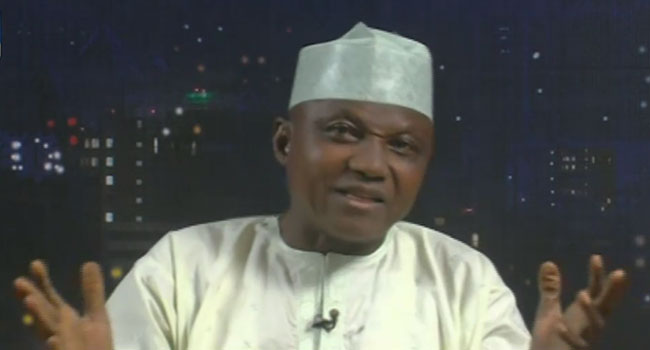 The Presidency has said that President Muhammadu Buhari contravened no law as amended in the constitution with regards to the suspension of the Chief Justice of Nigeria, Justice Walter Onnoghen.

Mr Garba Shehu, the Senior Special Assistant to the President on Media and Publicity, said this on Sunday during his appearance on Channels Television’s Politics Today.

Garba said the President has done no wrong by taking an action and making a decision based on the advice of a competent court of law.

“The President acted on a directive by a court of law recognised by our own constitution, and so, therefore, our President has done no wrong,” he argued.

The President’s aide said our laws should be allowed to work.

He went on to say that, “It’s a settled matter, I am not even sure that investigation is warranted in this circumstance because there is an admission”.

Garba also noted that it is wrong to see Onnoghen’s Suspension as political intimidation of anyone.

“The President needs not to intimidate anyone because in any case, he has no case before any judge,” Garba said.

He said Nigerians are just concerned that President Buhari is not doing this (Onnoghen’s Suspension) in a very nice way, asking, “Are we concerned about nicety or doing the right thing?”

The presidential spokesman also said that those people who are saying that the nation is drifting into a dictatorship, “have fallen into amnesia”.

He argued that they have forgotten what actually is a dictatorship, saying that if the nation had fallen into despotism then many who have openly threatened the President on Onnoghen’s case will not be talking and walking free.

No Land Has Been Gazetted For Ruga Settlements, Says Benue Govt