Elder statesman and former Commonwealth Secretary-General, Chief Emeka Anyaoku, has asked the Federal Government to reconsider its stance on the call for restructuring and return to true federalism.

According to him, the country is under-performing and lacking national cohesion like never before, a situation he believes can only be resolved by restructuring its present governance architecture.

He said, “Judged by all the relevant indices, Nigeria today is clearly underperforming and lacking national cohesion as never before.

“If our country is to succeed on the road to political stability and realisation of its rich development potential, it must, by restructuring its present governance architecture.

“It must return to the true federalism that it practiced in the years before the military intervened in our national politics”.

With the general elections just days away, Chief Anyaoku who was speaking at a symposium to unveil the new logo of The Nigerian Tribune on Tuesday, also called on the Independent National Electoral Commission (INEC) to ensure a credible exercise. 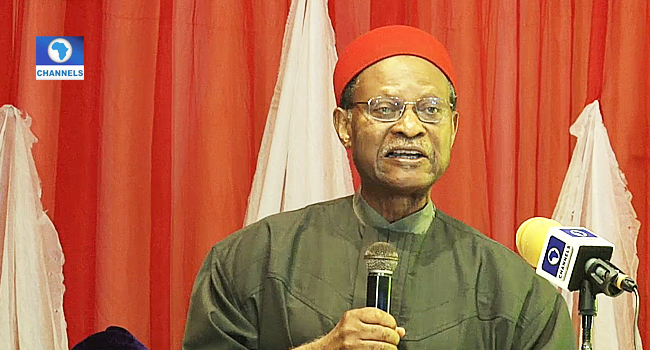 According to him, the international community is watching to see how far the nation’s Constitution is respected.

He said, “As our country is preparing for the general elections in two weeks time, I have three observations to address the Nigerian government, INEC and others.

“First, Nigeria’s friends and the whole of the international community are watching… watching the behaviour of Federal Government and its agencies, including especially the police, the army and the other law-enforcement instruments, to see how far we respect the country’s Constitution, our Nigerian government, like all other governments over the world, while of course guiding its sovereignty should pay heed to the views of the international community otherwise, the country will return to the pariah status which it happily exited in 1999 when it once more embraced democracy.

“My second observation is that INEC had earned deserved compliments for its commendable handling of the last gubernatorial elections in Ondo and Anambra States.

“But it must be admitted that it attracted criticisms for its conducting subsequent similar elections in both Ekiti and Osun.

“I urge INEC to remain aware of the fact that the credibility of the results of our forthcoming elections will depend on the level of impartiality and transparency it demonstrates in ensuring all aspects of the elections are free and fair, thereby making the results to truly represent the will of the people”.

INEC Is The Most Improved Public Institution In Nigeria – Yakubu

‘True Federalism Is Necessary At This Juncture Of Our Political, Democratic Evolution’ – Buhari